Review: This is a rare instance where we’d like to see the original theatrical release 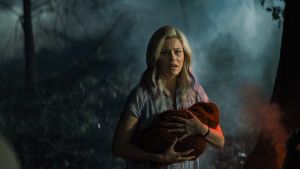 You won’t need a degree in superhero studies to twig what’s going on in this interesting variation on genre conventions.

Elizabeth Banks and David Denman play Mr and Mrs Breyers, a couple living childlessly in a remote corner of Kansas when – in unlikely answer to their prayers – an unearthly sphere crashes noisily on to the back garden. We zoom forward 12 years to find them raising a quiet, studious young fellow called Brandon (Jackson A Dunn).

The arrival of puberty triggers even more troubling changes that usually accompany that condition. He has superhuman strength. He chews forks. He takes an interest in human anatomy. There is ultimately a suggestion that he can fly.

James Gunn is not pointing just towards the generic traditions of the superhero – note Brandon’s alliterative name – but also specifically towards the origin story of Superman. Produced by Gunn (and written by his brothers Brian and Mark), Brightburn treads in similar territory to his 2010 feature Super. That film made an indie comedy of an ordinary man’s career as a superhero. The current project employs horror tropes to consider how Superman might appear if he was not so benevolently disposed to middle-western humanity.

The conceit works brilliantly until, in the closing 20 minutes, it clatters disappointingly into a fatal uncertainty. All versions of Superman have wondered how the hero’s fantastic gifts would unnerve his adoptive parents. Banks and Denman, both excellent, play characters who have been deceiving themselves since they found the child and who, thus, already have the tools to make something less threatening of the evidence before them. Laying brutal horror on social outrage, the film drags us tensely towards their inevitable showdown with reality.

Unfortunately, it has no idea where to go next. The film could be gesturing towards a sequel or deliberately abandoning us at an uncertain corner. The suspiciously neat 90-minute running time suggests some ruthless snipping has taken place before a half-hearted theatrical release. This is a rare instance where we’d like to see the original cut.