Toy Story 4 trailer: Woody’s there. And Mr Potato Head. But no John Lasseter ... 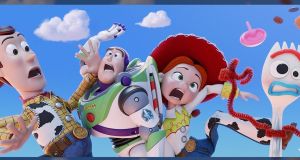 The first full-length trailer for Toy Story 4 has arrived. In one sense, the people at Pixar could not be pushing at a more conspicuously open door. The last Toy Story film made over $1 billion. Whole generations have grown up with Woody and Buzz. Who wouldn’t want another?

Well, there is a feeling that the first three films formed a perfectly complete trilogy. The last picture ended with the toys saying goodbye to Andy and the audience accepting that the franchise had given in to terminal adolescence

You fool! There’s money to be made.

Pixar need to touch all the old notes while sending us in a few fresh directions. The new promo suggests they’ve taken that challenge seriously. Our pals are now in the possession of a young girl called Bonnie.

Acknowledging that kids will still occasionally show as much interest in garbage as products of EnormoToy, the writers introduce us to a scary being fashioned from a spork and stuff out of the bin. This is Forkie and, when he goes missing, we are – if the trailer tells us the truth – propelled into a zany sort of road trip.

This looks just fine. The Toy Story films have always blended rollicking adventure with snippets of existential despair. Forkie, voiced by the amusing Tony Hale, helps us out with the latter when he asks: “Why am I alive?” The reliably pompous Woody says something about helping out the kids, but, for the rest of us, the answer has something to do with keeping the Entertainment-Industrial Complex ticking over.

There’s no reason Toy Story 4 shouldn’t do that. The trailer features some scary ventriloquist dolls (there’s often been spooky stuff), a Bo-Peep in peril (keep the cliff-hangers coming) and confirmation that old pals such as Rex and Mr Potato Head are still about.

Somebody who isn’t in the mix is Mr John Lasseter. Maybe Woody and Buzz will spring him from #Metoo jail in the last frame.

I wouldn’t count on it.

Saoirse Ronan: ‘I never got cast for my looks’
8