Ben Is Back: Julia Roberts is painfully on edge in study of addiction

Review: The two leads spare no effort in teasing emotions in sincere melodrama 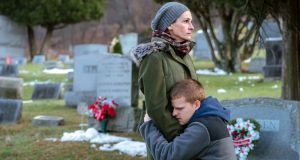 Julia Roberts and Lucas Hedges in Ben Is Back. Photograph: Lionsgate 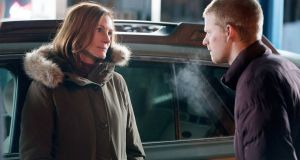 Film Title: Ben is Back

The winter of issue movies about young men and their worried parents comes to an end with another supposed awards trap that failed to catch the voters’ eyes. Lucas Hedges was top-notch in Boy Erased, but it is Beautiful Boy, a showcase for Steve Carell and Timothée Chalamet, that offers source for worthwhile comparison here. That attractively made, dramatically flat film felt like Go Ask Alice with music supervision by your Da. Ben is Back is a more calculated piece of work.

It begins as a study of addiction – taking us through typical causes and consequences – before veering into a contrived chase that rations its shocks ruthlessly. The film is none the worse for that. It’s a cynical operation, but it cracks along at a nerve-shaking pace and the two leads spare no effort in teasing our emotions.

There’s something sweet about the suspicion that Hedges, Oscar-nominated for Manchester By The Sea, helped his dad Peter, director of the fine Pieces of April, get the money together for his sincere melodrama. It’s sort of a Christmas movie.

Holly (Julia Roberts) arrives home on Christmas Eve to find her son Ben (Hedges), who has been in an addiction facility, lurking expectantly on their middle-class porch. When the family’s pills are all tidied away, they settle down for some awkward bonding – the family dog is still the lad’s pal; his betrayed sister is somewhat less forgiving – but we know Ben’s past is sure to come calling. Before the presents have been opened, mother and son are flung on to the streets in a desperate race against time.

There is some clunky editorialising here. Characters make sure to point out that, however hard things are for Ben, it would be more unpleasant still if he were black or poor. Within the limitations of its compromised form, Ben is Back remains, however, a gripping entertainment that gets across worthwhile truths about contemporary strains of an ancient disease. Hedges is wracked. Roberts is painfully on edge. Only a monster could fail to wish both characters well.

Bad Boys for Life review: The funny bits are funny. The serious bits are even funnier
10

Isabel Allende: ‘Where are my roots? They are in my books’
Real news has value SUBSCRIBE