Everybody Knows: Cruz and Bardem fail to steal this kidnap drama 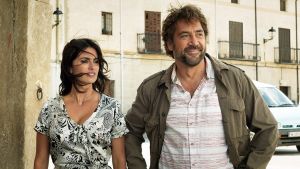 Everybody Knows: Penélope Cruz and Javier Bardem are cleverly cast as former lovers

If Everybody Knows (awful title, by the way) emerged as the first film from a promising Spanish director – or just the first we’d noticed – then we might reasonably find ourselves praising it to the horizon. This is a classy slice of middle-brow art cinema structured around a convoluted mystery that comes to a reasonably satisfactory conclusion.

Penélope Cruz and Javier Bardem, partners in the real world, are cleverly cast as former lovers who haven’t fully shaken off their antique passion. Cinematographer José Luis Alcaine, a frequent collaborator of Pedro Almodóvar’s, douses the countryside in adorable shades of awards-bait bronze. Oh to gobble it up with a bowl of olives and a glass of Amontillado.

The picture is, in fact, the latest from the Iranian master Asghar Farhadi and it sticks closely to the formula he has honed over the past decade. In films such as A Separation and The Salesman a couple find the strains in their relationship stretched to squeaking point following an obscure catastrophe. Paco (Bardem) and Laura (Cruz) are no longer together, but the dynamics are much the same. Laura, now living in Argentina with her apparently successful husband, returns to her home village for the marriage of her sister Ana (Inma Cuesta). In the opening half hour, the film effectively replicates the effect of being a stranger in a family group by introducing us to more relatives than any person of average intelligence could absorb. We do learn that Paco long ago bought land from Ana’s family and that he has turned it into a successful vineyard.

The picture buzzes deliciously about the various attractive characters. Irene (Carla Campra), Ana’s teenage daughter, has a bit too much to drink and collapses into bed. The next morning she is nowhere to be found. A ransom note arrives and Paco finds himself under pressure to release some capital. The girl is not his daughter, but her father seems less loaded than the kidnappers (and everybody else) suspected.

Farhadi’s screenplay works hard to provide everyone with a motive. We eventually end up with something like A Kidnapping on the Iberian Express. That mystery is more satisfactory than the psychological drama, which reveals less about the characters’ inner demons than we have come to expect from this director. Everybody Knows feels like Farhadi Lite: a crowd-pleasing entertainment that gets only a few layers beneath the skin.

Engrossing for all that.