Captain Marvel: It’s such a shame this film isn’t a little better

Review: The first Marvel release with a woman protagonist can’t do for the 90s what Bumblebee did for the 80s 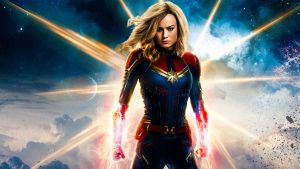 It is such a shame this film isn’t a little better. The first episode in the Marvel Cinematic Universe with a woman protagonist has already taken flak from the same moronic tiny-beards who habitually spend this week wondering whether International Men’s Day exists. They can calm themselves. Brie Larson does get to beat up aliens to the strains of No Doubt’s Just a Girl. But you would need to squint hard at Captain Marvel to discern any traces of the Society for Cutting Up Men. It’s decent mid-ranking Marvel. Most fans will find something to like. It’s got a great cat. No horses are scared.

We shouldn’t be surprised by the soft-pedalling on feminism – much representation, little assertion – from an emanation of the world’s mightiest entertainment conglomerate. That’s not their bag. What does irk is the filmmakers’ inability to focus on the stuff that really works. The advance publicity has prepared us for a film that has fun with 1990’s iconography. Following a lengthy opening act (about which more in a minute), a super-powerful alien being – who never really becomes “Captain Marvel” – plummets through the roof of a Blockbuster Video outlet and emerges to greet Clinton-era southern California. There to help her is an uncannily de-aged Samuel L Jackson as an initially biocular Nick Fury. In a film saturated with much flashier CGI, the smoothed-out Jacko really does register as (ahem) a Marvel. This version couldn’t be easily mistaken for the star of Pulp Fiction, but he doesn’t look like a refugee from Uncanny Valley either.

There follows a first-rate sequence in which the protagonist – call her Carol Danvers, Captain Marvel or Vers – fights with shape-shifting aliens on a hurtling train. The slapstick is solid. The action is propulsive. The team go on a road trip and rub against various reminders of an era when the studios believed comic-book movies didn’t sell. There are suggestions here that Captain Marvel could do for the 1990s what the recent, wonderful Bumblebee did for the 1980s. Sadly, that inner segment is squeezed into a wafer by a framing space operetta that would probably seem silly if I could figure out what was going on.

The opening section rejects world building for world-splaining. Smooth, scary Jude Law trains Vers (as she is then called) on a planet formed from uninteresting lines of spat-out pixels. It seems that an evil species called the Skrull, led by Ben Mendelsohn, are using their chameleon powers to take over blameless worlds in many galaxies. Following Vers’s first mission she is somehow propelled back to Earth and invited to disentangle a forgotten past that involves jet fighters and Annette Bening.

There’s nothing wrong with stupid. Recent Marvel films – Thor: Ragnarok in particular – have been at their best when enjoying the silliest corners of their imagined universes. Captain Marvel also plays with the right sort of stupid: jokes about Schwarzenegger, a scene-stealing performance from Goose the marmalade cat. Too much is, however, taken up with a school of over-complicated stupid that was worked to the bone by Flash Gordon 80 years ago. By the close, Anna Boden and Ryan Fleck, directors of the very different Half Nelson and Mississippi Grind, are struggling desperately to accommodate the advertised 1990s larks with the accumulating narrative anarchy. There seems no justification other than the year of its release to play Nirvana’s Come as You Are – a characteristic exercise in existential misery – beneath an unrelated scene in the closing act.

Larson does well enough in a role that would better suit an actor less wedded to underplayed naturalism. Marvel needs a bit more Stanwyck and a bit less Ullmann. It’s not for us to say if she’ll be back before the summer is out, but, for those who care, a mid-credit sequence says something or other about upcoming Avengers matters. If you can be bothered.

Charlie Daniels, country star who sang The Devil Went Down to Georgia, dies at 83
7

Amybeth McNulty: the Donegal teenager who stars in ‘Anne with an E’
10