Girl: For good or ill, this trans drama feels like a landmark film

Review: There is no easy way of addressing such a nuanced subject 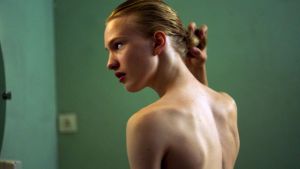 There is no easy way of addressing a nuanced subject such as sex reassignment. Every creative choice risks destabilising the structure and causing an awkward corner to stick into passing ribs. Lukas Dhont’s deeply felt drama, winner of the Camera d’Or for best first feature at Cannes, has triggered some disquiet among reasonable observers.

The casting of a cisgender actor in the title role was always going to prove controversial. Girl’s focus on gender dysphoria – particularly as that relates to the protagonist’s genitals – has caused still more muttering in the sidelines.

It is, however, hard to dispute the movie’s empathetic engagement with its source material. Inspired by the life of Nora Monsecour, a trans woman from Belgium, Girl takes us through the experiences of a young ballet dancer called Lara (Victor Polster) as she undergoes hormone replacement therapy and prepares for sex reassignment surgery.

The engagement is so intimate the film occasional feels like documentary, but there is no mistaking the young director’s grasp of the medium. Frank van den Eeden’s camera follows when necessary and holds back when discretion better suits. The screenplay, by the director and Angelo Tijssens, is pared to the bone. Polster’s ability to convey coiled tension, both emotional and physical, speaks to an unusual degree of commitment.

In his struggle to get Monsecour’s story on screen, Dhont has defied all the screen-writing gurus and cut down antagonists to a minimum. We have come to expect films about trans people to focus on abuse and bullying. There is some of that in here.

The story does not ignore the hurt of deadnaming. One awkward scene finds a teacher asking the girls in her class to vote on whether they are comfortable having Lara in female changing rooms.

But, for the most part, Lara moves through the most supportive environment imaginable (maybe this says something about Belgium). Her doctors know what they’re doing. Her amiable single dad (Arieh Worthalter) has read all the books, listened to all the therapists and is sympathetic to her journey throughout.

The decision to move away from a combative narrative allows focus on the protagonist’s personal battles: the pressures of ballet, uncertainties about the looming medical procedures.

There is much activity in Girl, but the conflict is taking place mostly in Lara’s head.

So what do we make of a cisgender performing such a role? It is probably for others to say if such decisions are ever acceptable, but this is certainly not the sort of stunt casting that sees a well known star – let’s call him Jared Redmayne – showing off their supposed bravery by engaging with an identity they don’t share.

Dhont auditioned people of all genders in search of an actor who could convince as someone going through these changes and who could also dance to a back-breaking, toe-splitting standard. Polster does all that and more.

The performance is characterised by an emotional truth that even those uneasy with the gender realities will struggle to resist. He convinces as a young woman who doesn’t dare to believe the reassurances of those who love and advise her.

You could argue that, as well as lacking designated bad guys, Girl is a bit short on conventional narrative. The character study is, however, gripping enough to compensate for the swerve away from neat plot beats.

More worrying is a traumatic late development that – whether based on fact or not – justifies some of the criticism from trans writers concerned about mixed messages.

For good or ill, Girl feels like a landmark film. There is a seriousness of purpose here that is rare in an age where most arguments are carried out in block capitals. The word “important” is, for once, worth brandishing.