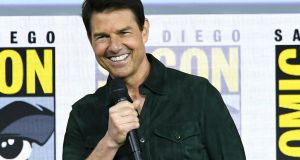 When Top Gun: Maverick emerges next June, 34 years will have elapsed since the release of Tony Scott’s original film. If a similarly delayed sequel were arriving in 1986 it would be to a project first unveiled in 1952. Gene Kelly dusting off his taps for Singin’ in the Rain: After the Rainbow. Gary Cooper rising from the grave for High Noon: Dead by Midnight. Those sorts of things. The same year that Top Gun bossed the box office, one Tom Cruise starred opposite a grizzled Paul Newman in Martin Scorsese’s sequel to The Hustler. Trade publications remarked on the yawning gap between the productions. It was a “mere” 27 years.

Tom Cruise does not appear as a creaking veteran in the trailer to Top Gun Maverick. He comes across as much the same Tom Cruise whose stardom helped define the late Reagan era: twinkly, cheeky, unblemished as a newly birthed kitten. I’m no expert on military aviation, but I’m betting few 57-year-old men fly fighters for the US Navy. Heck, you’re as likely to meet a female romantic lead of that age (more on that in a minute).

To be fair the to the filmmakers and the people who cut the trailer, this implausibility is addressed - if not exactly explained - in the opening seconds. Angry officer Ed Harris, who also looks much the same age as he did in 1986 (about 69), bellows the questions at Cruise that we are all asking ourselves. “Thirty-plus years of service, combat medals. Citations. The only man who’s shot down three enemy planes in the last 40 years,” he rumbles. “But you won’t take a promotion and, despite your best efforts, you refuse to die. You should be at least a two-star admiral. Yet here you are: captain. Why is that?”

You just know a quip is coming. I’ve got a shot ready for the Quip Drinking Game.

Is that all you got? I suppose it will have to do.

It shouldn’t need to be pointed out that Admiral Harris is not only asking Peter “Maverick” Mitchell these questions, he is also asking them of Tom “Eternal Life” Cruise. Stewart Granger once wryly noted that, rather than aging into a character actor, he had aged into an older leading man. Cruise looks to have aged (if that is the word) into the same leading man he was when mobile phones were the size of briefcases. Despite occasional blips such as The Mummy, he sells tickets - especially in overseas territories - like no actor half his age.

Surrounding publicity tells us that, allowing some concessions to the passing decades, Top Gun Maverick positions its hero as the new flight instructor at Top Gun school. Miles Teller, virtually invisible in the promo, plays the son of the late “Goose” (Anthony Edwards in the first picture). Jon Hamm strides across the apron. Jennifer Connelly gets to show off her A-list hair.

Never mind the new cast members and plot innovations. The trailer is shameless in running riffs on images from Scott’s blend of pop video and recruitment film. Cruise flying in formation. Cruise pulling on a leather jacket. Cruise racing a jet in a motorbike. We live in uncertain times and the Top Gun trailer is here to remind us that some things can remain exactly the same. We have no idea how Top Gun Maverick, directed by journeyman Joseph Kosinski, will turn out. But the promo promises no drifts into avant-garde novelty or any experiments in fractured narrative. The cast have been working overtime in pressing home the message. Even the effects are old school. “The aerial footage is mind-blowing,” Hamm said recently. “And it’s mostly practical. There’s not a lot of CG. Those guys are really up in planes and getting thrown around in multiple Gs.”

But Hollywood’s attitude to women has changed in those years, right? Not so much. Top Gun deserved praise for casting Kelly McGillis as a top boffin and “badass” (as we didn’t say so much then) flight instructor. She is not in the new film. The closest thing to an older actress in the cast is Jennifer Connelly, who - though ancient by Hollywood standards - is still nearly a decade younger than her leading man. Now 62, McGillis was never going to be in the Maverick loop. That’s how the industry rolls.

Things may change, but not just yet. Such is the message of the trailer’s closing moments. “Your kind is headed for extinction,” Harris says. Cruise replies: “Maybe so, sir. But not today.”