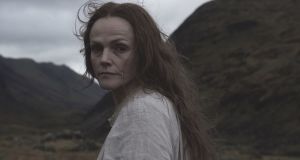 GWEN ★★★★☆
Directed by William McGregor. Starring Maxine Peake, Eleanor Worthington-Cox, Richard Harrington, Mark Lewis Jones, Kobna Holdbrook-Smith, Jodie Innes
This lovely, spooky thing stars young up-and-comer Worthington-Cox as Gwen, a teenager struggling to take care of a younger sibling (Innes) and ailing mother (Peake) in dankest 19th-century Snowdonia. The crops are not growing properly and the sheep have been slaughtered. An attempt to sell their meagre vegetables at market ends with the death of the family horse. All the while, mother is behaving in increasingly erratic ways and engaging in occultish looking bloodletting rituals in her room. Are these actions borne of scientific ignorance, or is something more witchy going on? 15A cert, lim release, 84 min TB Full review

This final film from the late photographer, film-maker, conceptual artist and pioneer of the Nouvelle Vague offers a timely retrospective of her life’s work. It’s a freewheeling affair anchored by a (kind of) Ted talk on what Varda calls cine-writing. Theme trumps chronology as she takes the viewer through her early years as the only woman to emerge alongside Godard, Truffaut and Rivette, her seminal 1962 feature Cleo from 5 to 7, and her marriage of The Umbrellas of Cherbourg director Jacques Demy. Varda died in March; watching the sprightly, energetic creature at the heart of this picture, it’s hard to believe she’s gone. 15A cert, lim release, 115 min TB Full review

Jarmusch tackles the zombie movie in an amusing comedy about a midwestern town that goes all weird thanks to a shift in the Earth’s poles. There are few variations on the familiar conventions. What Jarmusch does bring is an awareness of contemporary panics and neuroses. He can deny (and he has) that The Dead Don’t Die is an “anti-Trump movie”, but the prevailing sense that something has gone profoundly wrong in the republic is very much of our time. 16 cert, gen release, 105 min DC Full review

Elena (Costa) and Tom (O’Connor) have a meet-cute moment while competing for a late-night taxi in Glasgow on New Year’s Eve. But after some drunken fumbling and clumsy mansplaining of Elvis Costello’s I Want You, they end up in a relationship. There’s a small catch:: she’s actually 35 to his 26, and soon the relationship is a battle against infertility. Writer-director Wootliff’s sensual, heartful, and carefully observed drama is produced by Tristan Goligher (45 Years, Weekend) so it’s not surprising that Only You is powered along by the same romantic realism that defines Andrew Haigh’s work. 15A cert, QFT, Belfast, 118 min TB Full review

If you didn’t view Steve Bannon as a world class troll before, this documentary portrait may just change your mind. Red-faced, soda-swilling and frequently looking more than a little green around the gills, the former White House adviser certainly looks like an armchair warrior. His health and dietary habits are, in common with many of his unpalatable habits and beliefs, dismissed in well-rehearsed, self-deprecating one-liners. Director Klayman, who won big at Sundance in 2013 with Ai Weiwei: Never Sorry, allows Bannon to do his everyman shtick, but never succumbs to the Stockholm Syndrome that too often kicks in with personality politics. Club, IFI, Dublin, 90 min TB Full review

Dani (Pugh) is already struggling with a seriously ill bipolar sister and her indifferent boyfriend Christian (Reynor), when a horrifying murder-suicide claims the lives of her entire family. Feeling guilty, Christian reluctantly invites Dani to join him and his friends on a trip to the remote Swedish commune where one of them was raised. Upon arriving in Halsingland where, in keeping with the title and geography, the sun never sets, the friends are given hallucinogens and asked to take part in a nine-day ritual held once every 90 years. Fans of The Wicker Man or will know that no good can come of this sojourn. Following on from last year’s Hereditary. Aster’s trippy second feature confirms him as the most fascinating genre auteur around. 16 cert gen release, 147 min TB Full review

Other ★★★★★ and ★★★★☆  films out and about: Amazing Grace, Apollo 11, Diego Maradona, Metal Heart, Rocketman, Yesterday. See all current synopses here