The Commuter review: Liam Neeson just about stays on track 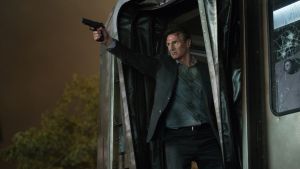 A mathematical problem. If x is Liam Neeson and y is the ridiculous thing that Liam Neeson has to do so that his wife/family are no longer in peril and/or jeopardy. And if x and y are both travelling at a mighty velocity, then what is the mode of transport?

If you answered airplane then you’re a fool who can’t tell one high octane Jaume Collet-Serra directed Liam Neeson vehicle from another. Having successfully performed y on board a transatlantic flight in 2014’s Non-Stop, The Commuter places x on a train travelling between an American city and far-flung suburbia. And we do mean far-flung: the film was actually shot in Buckinghamshire and Surrey.

The ridiculous rules and circumstances behind this speedy venture are laid out over the opening hour. Ballymena’s best-loved export is an ex-cop who quit the department to get away from his dirty colleagues. When he’s unexpectedly laid off from his job in the insurance sector, he meets up with an old detective buddy, played by Patrick Wilson, for a conciliatory beer. Pay close attention: the bar buds, including x’s former superior Sam Neill, may well be embroiled in the film’s Borgesian set-up. Guff about crooked property deals to follow.

As part of an apparent ongoing two-for-one offer on Conjuring stars, Vera Farmiga soon pops up to interrupt Neeson’s hangdog commute home. Take the $25,000 stashed in the loo and find someone called Prynne before the train reaches the last stop. Oh, and his wife and son are now in peril and/or jeopardy.

The running around which follows is perfectly convincing; the green screen effects are less so. The suspects on the train conveniently conform to easily recognisable stereotypes played by voguish actors, including shady guy (Killian Scott), punkish girl (Florence Pugh), and yuppie snob (Discovery’s Shazad Latif). The real star, however, is editor Nicholas De Toth (son of Andre) whose breakneck pacing, combined with Neeson’s growling charisma, allows us to forget that not much in The Commuter makes a lick of sense.

No matter: x + y is greater than the most recent Murder on the Orient Express, even if it’s less than such railway-related classics as Unstoppable or The Taking of Pelham 123.