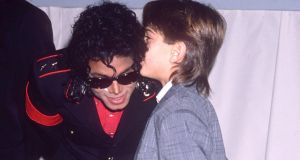 Michael Jackson with James Safechuck, one of his accusers, in 1988. Photograph: Eugene Adebari/Rex Features

It’s a documentary Michael Jackson’s estate doesn’t want you to see. But despite legal threats, HBO and Channel 4 will air Leaving Neverland next month.

A new trailer offers a first look at the troubling two-part, four-hour film that premiered at Sundance film festival last month, featuring the testimonies of James Safechuck and Wade Robson, who allege that Jackson sexually abused them as children.

“He told me if they ever found out what we were doing, he and I would go to jail,” says Robson in the trailer.

The film shocked critics and audiences when it was shown at Sundance. Variety’s Owen Gleiberman called it “devastating” and the Hollywood Reporter’s Daniel Fienberg praised it as “complicated and heartbreaking”.

Jackson’s estate has already criticised the film in a 10-page letter addressed to HBO’s chief executive. It denied the allegations and condemned director Dan Reed for not speaking to anyone in Jackson’s family or legal team. Since the film premiered, some Jackson fans have attacked the director and the two accusers.

“There is also this league of fans who are almost like a cult, and they say very nasty things [about the film] on social media,” Reed said to Vice. “And their words echo the two-decade-long rhetoric of the Jackson family and legal team, which is shaming the victims. It happens often in these cases. It’s what they do very aggressively and relentlessly, and I don’t think you can get away with that in 2019 like you could in the past.”

Earlier this month, a Chicago pre-run of an upcoming Broadway show based around Jackson’s music was cancelled because of the Actors’ Equity Association strike reportedly causing delays. Equity has rejected that its “modest” demand was to blame for the cancellation.