Review: The movie is never boring, but too often treats the audience like morons 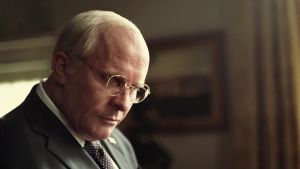 Three years ago, Adam McKay, hitherto known for spit-out-your-Fanta comedies such as Step Brothers and Anchorman, devised an ingenious new class of storytelling for the Oscar-winning The Big Short.

Aware that almost no mortal understood the economics behind the US housing bubble, he used cheap games, broad skits and jarring inserts to clarify some confusions and to amplify others. One message was: you may as well have some fun while you’re failing to grasp all this.

McKay, with more mixed results, brings the same techniques to this unquestionably entertaining examination of the rise, withdrawal, and rise again of Dick Cheney.

The problem with his approach here is that little of what’s being discussed is difficult for any half-awake person to understand. Treating the audience just a little like morons, he casts Alfred Molina as a waiter and has him offer Cheney (Christian Bale) and Donald Rumsfeld (Steve Carell), metaphorically dining, the totalitarian options available after 9/11. They’ll have ’em all, of course.

Nothing there is hard to follow. The joke isn’t particularly funny. It is one of a few scenes that would have been better played straight.

Yet Vice is never boring. Acting as a partial rebuff to those liberals who, after the arrival of Donald Trump, feel themselves missing the second Bush administration (“partial” because Sam Rockwell’s George W still comes across as a likeable buffoon) the picture takes us from Cheney’s time as a drunken frat-boy to early days in the Nixon White House, to retirement from politics, to his role as the most powerful vice president in US history.

You would struggle to find many nuances in Bale’s performance, but this is a grand example of what Orson Welles used to call “King acting”. Increasingly bulked up as the film progresses, he moves like an iceberg and rumbles like a distant juggernaut.

Bale strikes an effective, complementary contrast with Amy Adams who, as the combative Lynne Cheney, seems almost human in a film that deals largely in caricatures. It is Mrs Cheney who persuades the young idiot to stop drinking, and it is she who points him towards his political future.

Adams also gets to remind us that middle-American populism has always been a factor when, as Lynne stands in for an ill Dick, she rants about the liberal “snobs” who look down on the Maga legions (as they weren’t yet called).

The nods to Mr and Mrs Macbeth are unmistakable even before, as the Cheneys consider Bush’s offer of the VP slot, McKay launches a Shakespeare pastiche that has no right to work so well as it does.

We are constantly alternating between sound creative decisions and less happy flourishes. McKay’s decision to probe Cheney’s moral values through his relationship with his lesbian daughter Mary proves fruitful.

Republicans are always droning on about the importance of family and, if the script is accurate, Dick honoured those values until confronted with an ethical knot that resisted untying.

His decision to move away from politics is illustrated by a delicious conceptual gag that compensates for so many bum notes elsewhere.

Less successful is the decision to have Jesse Plemons – playing an American Everyman – narrate the story in a bold style that alternates between hectoring self-righteousness and irony so noisy it barely deserves the name. The continuing metaphor concerning fishing lures is clunkier still.

The ultimate impression is of a film-maker struggling to keep an ungainly mass of conflicting ideas in lucid order. One imagines him trying to gather together sheets of screenplay as a furious wind blows through his office and scatters them to the ceiling. One further imagines Dick Cheney trying to make sense of the Iraq War after it failed to end as he and his cohort expected.