The Mule: Clint Eastwood snarls and frowns through another geriatric meltdown

Review: The actor is unsure how to play a nonagenarian transporting drugs for cartels 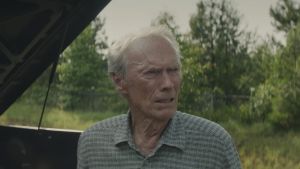 We’ve all heard the stories about Clint Eastwood directing with a nonchalance that allows all shots to pass as long as the camera doesn’t fall over. His latest ramshackle thriller is blessed with a scenario that can’t fail to generate a few indulgent smiles: Clint plays a nonagenarian transporting drugs for the Mexican cartels.

He gets to direct that asymmetric growl at a few unhelpful young people. He has the usual opportunities to rage against the dying of lights. Unfortunately, the script feels no more honed than the make-do direction.

One illustration will do. The Mexicans select Earl Stone (Clint), a bankrupted flower mogul, to transport drugs because they reckon the cops are never going to stop an elderly white guy in a beaten-up van.

However, about halfway through, following a change in regime, the chief hoodlums get suspicious of Earl and assign two goons to follow him across the US. Everywhere he goes, the cartel’s sedan lurks four lengths behind. What was the point of hiring Earl again?

Such shoddiness characterises a film that seems derived from a rushed first draft. Clint is unsure what to make of this mad old rogue. He has his kindly moments, but he’s happy to figuratively cuddle up to Andy Garcia’s boss hood (whose gold-plated shotguns blare the character’s vulgarity) and literally cuddle up to sex workers one-quarter his age.

Maybe he’s a Robin Hood. He helps out the local veterans’ lodge and pays for his granddaughter’s tuition. We can’t quite tell if he’s a full-on racist or if he has just failed to catch up with the current terminology. The result is alienating. We don’t understand Earl enough to care.

Elsewhere, characters nervously wait for integration into the story’s spine. Bradley Cooper is a cop in pursuit. Dianne Wiest suffers gallantly as Earl’s ex-wife. Neither gets the chance to properly live.

And yet. There are worse ways of spending your time than watching Clint snarl, shuffle and frown his way through another geriatric meltdown. The other actors appear cowed, as if performing before a personification of the US constitution. Indeed, the whole film seems flattened by the distinction of his presence. It scarcely matters that little else is up to scratch.