Oscars 2019: 10 things we learned from the nominations

The Favourite could hardly have done better, but most of the big races are still competitive

Irish production The Favourite, starring Olivia Colman, Emma Stone and Rachel Weisz, is among the eight nominees for Best Picture at the 2019 Academy Awards. Video: The Academy 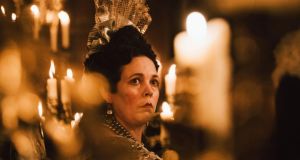 The Favourite could hardly have done better

With 10 mentions, Yorgos Lanthimos’s historical comedy The Favourite – produced by Element Pictures in Dublin – tied with Alfonso Cuarón’s Roma for the most nominations. It thus becomes the most nominated Irish production in Oscar history. It stands a strong chance in best original screenplay, best costumes and, for Olivia Colman, best actress. Might it be too recherche for best picture? These folk still scare easily.

Remember 2016, when, after all the excitement surrounding nominations for Room and Brooklyn, Ben Cleary turned out to be the sole Irish-born winner, for his short Stutterer? This year the nation scored a nomination in best live-action short – for Vincent Lambe’s controversial Detainment – and, with Louise Bagnall’s Late Afternoon, a mention in best animated short. Anything can happen in those races.

The Oscar for blah-blah popular film is dead

The Academy of Motion Picture Arts and Sciences announced the ill-fated “Academy Award for best achievement in popular film” – ridiculed into oblivion within days – as a way of ensuring that films such as Black Panther figure in a ceremony whose viewership is in sharp decline. The Marvel film scored a best-picture nod and, with seven mentions, was the fifth-highest scorer. The average takings of the best-picture nominees is a healthy $180 million, or almost €160 million. Forget about that mad plan.

Before kick-off the feeling was that the best-picture winners would be drawn from Alfonso Cuarón’s Roma, Bradley Cooper’s A Star Is Born and Peter Farrelly’s Green Book. Best picture and best director do diverge more often now, but it remains rare for a film to win one without even a nomination in the other. Meanwhile, Pawel Pawlikowski made it in despite his lovely Cold War not figuring among the eight best-film nominees. An interesting list.

There are few more striking anomalies in Oscar history than Paul Schrader’s failure to score a writing nomination. Both Taxi Driver and Raging Bull were up for best picture, for heaven’s sake. And there are 10 nominees in total. He was finally mentioned for the critics’ favourite First Reformed, but Ethan Hawke, star of that film, lost an expected slot to Willem Dafoe for his role as Vincent Van Gogh in At Eternity’s Gate.

There was, alas, no surprise here, but not a single film by a woman figured in best film or best director. Neither Chloé Zhao’s The Rider nor Debra Granik’s Leave No Trace – both greatly acclaimed – were mentioned anywhere at all on the list. The academy saved some face by putting three nominations the way of Marielle Heller’s smashing Can You Ever Forgive Me? It is better than at least four of the best-picture nominees.

There has been much unhappy buzz around Peter Farrelly’s Green Book. The family of Don Shirley, on whose life the story is based, objected to liberties taken with the facts. It emerged that Farrelly, the codirector of Dumb and Dumber, had behaved in a less than gentlemanly fashion on earlier sets. Yet Green Book still scored five nominations, including best picture. Bohemian Rhapsody, which lost a director in controversial circumstances, also picked up five. The voters know nothing of scandals.

The Irish Times predictions for best picture were spot on

We guessed there would be eight, and we named the correct eight. This is not to say we are delighted about the finalists. There are a few iffy nominees, and the absence of fine contenders such as If Beale Street Could Talk and Can You Ever Forgive Me? is to be regretted. The message is that, thanks to endless precursor awards and online coverage, it has become harder to spring a total surprise. There were some unexpected results but none that caused pundits to swoon and drop their pince-nez.

Yes, Netflix picked up a few nominations last year, but scoring a best-picture nominee and a joint nomination topper, with Roma, really puts the streaming giant in the awards picture. Alfonso Cuarón’s film overperformed in several places – notably in best actress and best supporting actress – and can reasonably count itself a marginal favourite for the top prize. That kicks up the possibility of a foreign-language film winning for the first time in the academy’s 90-year history.

Most of the big races are competitive

Fans of this eccentric, often barmy competition can look forward to a month of angry jostling for advantage. Best picture can still go any of four ways: Roma, Green Book, A Star Is Born, The Favourite. Best actress is a punch-up between Olivia Colman, Lady Gaga and Glenn Close. Bradley Cooper, Christian Bale and Rami Malek will squabble over best actor. We can probably pencil in Regina King, from If Beale Street Could Talk, for best supporting actress and heavily ink in Cuarón for best director. The rest of the high-profile battles are in flux.

The 91st Academy Awards ceremony is on Sunday, February 24th

Galway Film Fleadh online: The highlights of what to watch from wherever you are
5

Tom Hanks on Covid-19: ‘I had crippling body aches, was fatigued all the time and couldn’t concentrate’
6

Charlie Daniels, country star who sang The Devil Went Down to Georgia, dies at 83
10