The restrained genius of a Joe Pesci performance

Martin Scorsese’s The Irishman sees the director team up with Robert De Niro for the ninth time. Video: Netflix 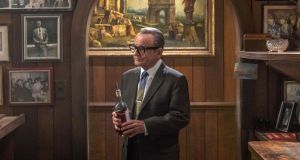 Tommy DeVito is entertaining fellow gangsters with stories of his exploits when one of his listeners, Henry Hill, tells him he’s funny. The laughter at the loudest table in the restaurant abruptly dies. Tommy, played by Joe Pesci in a career-defining performance, asks, “Funny how?”

Henry (Ray Liotta) is too unsettled to explain himself – he’s intimately familiar with the extent of Tommy’s brutality – but Tommy keeps pushing him. “I’m funny how? Funny like I’m a clown? Do I amuse you?” The two men silently lock eyes. Henry chuckles nervously and raises his hands in defeat.

After a few beats Tommy reveals that it was all a big joke, and everybody at the table starts loudly laughing again, as if they had all been in on the bit. Then the owner of the restaurant interjects, asking that Tommy pay his bill. Tommy, irate for real this time, viciously beats him.

This scene – said to be based on Pesci’s own experience of praising a gangster’s sense of humour back when he was waiting tables – is among the most iconic in the Martin Scorsese film GoodFellas, from 1990. After all, Tommy is emblematic of the flamboyant, jocular, psychopathic nature of many of Scorsese’s protagonists, including the enforcer he later plays in Casino.

But what makes the character so captivating is Pesci’s comedic timing and talent for recessive naturalism, skills that have made his screen appearances consistently intriguing yet underappreciated. Though he has been largely written off as a character actor, one who only could play variations on squawking wiseguys like Tommy, his career has long begged for reappraisal.

In the early 1990s Pesci would have fun with his ability to project ethnic pugilistic bravado – as in the Tales from the Crypt episode in which he woos wealthy, unhinged twins with his dirtbag charm; or alongside the automotive expert-cum-fashionista Marisa Tomei in My Cousin Vinny. But as the decade progressed, his career was increasingly limited to playing criminals, as in Home Alone, and appearing in broad comedies like the Lethal Weapon series and 8 Heads in a Duffel Bag.

The chemistry Robert De Niro and Joe Pesci share has spanned decades, and involved more than one life-changing professional intervention

After frequently lamenting the typecasting and grind of set life in interviews, he went into semiretirement to focus on jazz (under the pseudonym Joe Doggs), his family and golf. Even the comedian Louis CK, at the height of his prescandal fame, couldn’t coax Pesci to work with him; instead Pesci told him that he should quit doing stand-up because he wasn’t funny.

Now Pesci is back in his first major screen role in nearly a decade, as the real-life mobster Russell Bufalino in Scorsese’s The Irishman. Pesci carries himself with a quiet self-assurance. Russell is the one who discovers the truck driver Frank Sheeran (Robert De Niro) and converts him into a utility goon for the Mafia. Some of the most riveting moments between the two men take place when they make small talk while dipping pieces of bread in red wine, the power dynamic between them always evident.

As Russell introduces Frank to the reckless union boss Jimmy Hoffa (Al Pacino), David Ferrie (the bewigged character whom Pesci himself played in JFK) and others, Pesci plays him with an eerie, watchful calm. It’s not giving away much of the movie to say that, after gradually receding into the background in its second section, Russell re-emerges later as a much older man, his influence stronger than ever; Frank effectively becomes his lapdog. Without ever raising his voice or changing his methodical gestures, Pesci shows how Russell has altered the course of Frank’s life across decades.

The chemistry De Niro and Pesci share has also spanned decades, and involved more than one life-changing professional intervention. The story goes that De Niro, who was set to play the boxer Jake LaMotta in Scorsese’s 1980 film Raging Bull, spotted Pesci in The Death Collector (a Mean Streets-lite mob flick), and insisted to Scorsese that he play the boxer’s brother, Joey LaMotta. Pesci, who had been in show business since childhood, had given up on acting, singing and comedy in the late 1970s. But De Niro wouldn’t take no for an answer, and Pesci would go on to earn an Oscar nomination for best supporting actor for the movie.

Like his Russell in The Irishman, Pesci’s performance as Joey is guided by restraint: whereas Jake is ruled by his appetites – for food, violence, teenage girls – and freely expresses his emotions regardless of the situation, Joey remains the put-upon, sometimes humorous straight man. When Jake happens to see Joey on the street after many years of not speaking, he rushes over to smother him in kisses, while Joey merely tolerates the affection, like a cat being cuddled roughly by a toddler.

This downtrodden realism was at the heart of Pesci’s first starring role, in Dear Mr Wonderful, an underseen film from 1982 that offers an artfully meandering view of working-class life in Newark and New York City. Pesci plays Ruby Dennis, a painfully uncool, wannabe Las Vegas singer who performs at the bowling alley he owns, and is simply trying to keep up his payments to a mobster (played by his regular costar and former comedy partner Frank Vincent) and care for his absentee sister’s teenage son (Evan Handler).

Despite these stresses Pesci never overplays the indignity of it all. When a famous crooner (the real Tony Martin) stops by his bowling alley one night, Ruby sees his chance to make an impression, and pulls out all the stops on a big number – but Martin and his crew stop watching to bowl a few frames, in front of a photographer, then rush out. As Pesci looks at them go, he expresses this defeat without words or movements, without slouching or beating back tears. Instead, it all emanates from the haunted, crushed look in his eyes.

It wouldn’t be until The Public Eye, in 1992, that Pesci would be given another starring role in a drama, a testament to the industry’s narrow definitions of what leading men are supposed to look and sound like. (Winning the Oscar for his supporting role in GoodFellas certainly helped his case.) Playing a 1950s crime-scene photographer based on the real-life Weegee, Pesci, a cigar in his mouth in nearly every scene, tries to unravel a mob-murder mystery for a sexy widow (Barbara Hershey).

Neither a hero nor a romanticised antihero, Pesci exudes the controlled curiosity and integrity of an actual artist while hitting the right beats as a wisecracking, law-bending photographer might. Like Dear Mr Wonderful, the film is of its time but has a uniqueness that still feels fresh.

Although The Irishman is set within a familiar milieu of mobsters with boat-size cars, all captured in artful camera movements, its 3½-hour running time immerses us in this world’s punishing emptiness. Russell is the negative space from which all of Frank’s sins flow. That doesn’t absolve Frank so much as suggest the level of his own hollowness. Pesci plays Russell with a subtle menace conveyed through a blank look or a slyly covetous gaze. It’s clear why Frank’s daughter Peggy hates Russell. His attempts to be friendly to her are darkly comic, like the gruesome mobster deaths described in on-screen text, until you realise the perversity of his persistence.

Toward the end of The Irishman, Russell, who has been imprisoned along with Frank in their old age, gets wheeled away from their makeshift bocce court. “I’m going to church, don’t laugh,” he tells Frank matter-of-factly. “Don’t laugh.” This instruction – Pesci’s final lines – is surely intended for the audience, too. – New York Times

The Irishman is at cinemas now. It streams on Netflix from November 27th