Review: Kelvin Harrison jnr superb performance is worth mulling over 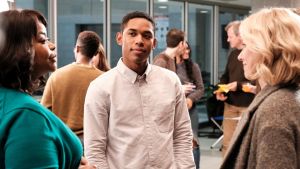 Duck and cover. Filmmaker Julius Onah’s powerful provocation is incoming. Seventeen-year-old Luce (Kelvin Harrison jnr) is a dashing popular high schooler who is as admired on the track as he is as debate team captain.

Luce’s charms are challenged by his prickly African-American history teacher, Mrs Wilson (Octavia Spencer), who calls on Luce’s Caucasian parents Amy and Peter (Naomi Watts and Tim Roth reuniting for the first time since the similarly incendiary Funny Games) after he writes an essay on the Pan-African activist Frantz Fanon.

Mrs Wilson is equally alarmed by a bag of illegal fireworks she has found in Luce’s locker. She has form in this respect: another African-American boy, DeShaun (Astro), was kicked off Luce’s athletics team after Mrs Wilson caught him with marijuana.

Luce, we learn, was adopted from war-torn Eritrea, where he was a child soldier. Amy and Peter have seen him through years of therapy and rehabilitation. Is Mrs Wilson, knowing the boy’s personal history, simply projecting? Is she being overly hard on him because he’s African-American? Or is something genuinely sinister going on?

Director Julius Onah, adapting with JC Lee, from the latter’s off-Broadway hit, builds slowly and menacingly towards a climax that yields as many tricky questions as it answers. Along the way, there are intergenerational, interclass and interracial frictions, bookended by a primal scene and an inverted primal scene. There’s a spectrum of prejudice that runs from innocuous expectation to abusive stereotyping.

Kelvin Harrison jnr, the young star of Trey Edward Shults’ It Comes by Night, is superb in a shifting, slippery role, as exemplified by twinned accounts of how his parents came to name him Luce, a story first related as a teary tragic loss, and then as a crowd-pleasing joke. A performance and a film worth mulling over.