Review: Ceaseless adulation grates – but it is still a fascinating study of a remarkable life 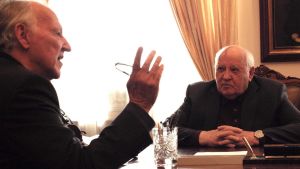 Werner Herzon meets his hero Mikhail Gorbachev to whom he explains most Germans have “overwhelming approval for you personally”.

Writing in Roller-Coaster, his recent history of the post-war years, Ian Kershaw breaks with the historian’s habitual caution about personality politics to admit that Mikhail Gorbachev’s character was a crucial factor in the ending of the cold war. Director Werner Herzog, not a man easily driven to enthusiasm, makes it abundantly clear that he agrees with that assessment in this absorbing, flawed documentary.

He doesn’t stop there. The great German film-maker, in his late 40s when the Berlin Wall came down, practically falls at Gorbachev’s feet. He explains that most Germans have “overwhelming approval for you personally. We love you.” Dispelling any suspicion that he is among the dissenters, Herzog adds: “I love you.”

The unrelenting adulation is a problem. More than a few interesting lines of inquiry are not followed to satisfactory conclusion. The former president is allowed to express reservations about (let’s be polite) Russia’s unfinished accommodation with democracy, but he is not specifically pressed about Vladimir Putin. I’d have enjoyed a follow-up question on his suggestion that Boris Yeltsin might have been “sent off somewhere”.

For all those flaws, Meeting Gorbachev remains a fascinating study of a remarkable life. The footage surrounding the core interview takes us from humble beginnings as a farmer – he was something of a combine harvester whisperer – to law school and on to the Politburo. Herzog’s gloomy humour makes the most of the rapid-fire funerals that successively interred Brezhnev, Andropov and Chernenko. His prestige secures revealing interviews with US secretaries of state George Shultz and James Baker.

The conversations with Gorbachev, who now looks more than ever like a water-marked Ed Asner, remind us that, for all the changes he delivered, he remained a believer in the Soviet Union. He is proud that the cold war ended – and refuses to admit that anyone lost – but regrets the loss of his home nation every day. When discussing Yeltsin, his bitter suggestion that “people like that sort of politician” points us towards the current US president (though, infuriatingly, Herzog again fails to follow up).

All this makes for an enlightening evening out. Herzog, however, includes at least one moment of characteristic lugubrious weirdness. “The lead story was about slugs,” he intones when discussing Austrian TV’s dismal early reports on the first cracks in the wall. He seems to greatly enjoy telling us how much the gastropods enjoyed their beer. This is still, after all, a Werner Herzog movie.