A film isn’t a history class. Clever audiences bring a healthy scepticism to the movies 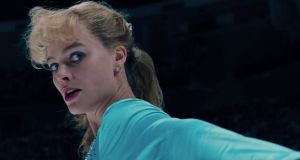 After one violent scene in ‘I, Tonya’, someone turns to the screen and says: ‘This didn’t happen’

Earlier this year, as Christopher Nolan’s Dunkirk boomed through the world’s cinemas, Hugh Sebag-Montefiore, historian of that battle, stepped up to tell the world the truth.

“When six British soldiers walk down the deserted but pristine Dunkirk street in the first scene, it is immediately clear that melodrama is to hold sway over inconvenient facts,” he wrote.

That’s right. It is. And jolly good melodrama it is too. What’s your point, Hugh?

To be fair, Montefiore does grasp the distinction between history and the slippery genre that is the historical drama. “The film is a cross between the best of the silent movies and a melodramatic Wagnerian opera,” he writes approvingly in the piece.

Montefiore’s article does, nonetheless, fit a journalistic template that has been employed throughout the story of film (and historical fiction for that matter). Some things in such films are untrue. Others are omitted. A particular perspective has been adopted that may not reflect the view of other participants. Most people already know these things. Those that don’t probably aren’t reading the articles.

There is always a lot of this stuff during Oscar season. There is more than usual this year. Dunkirk has got off reasonably lightly. The season’s other second World War history, Darkest Hour, has been getting it from both right and left.

But the most vigorous attacks have (perhaps unsurprisingly) been on films telling more recent stories: Steven Spielberg’s The Post and Craig Gillespie’s I, Tonya. Two recent articles pull apart infelicities in those films, but, as is often the case, what most riles the authors are the perspectives adopted.

The Post tells the story of The Washington Post’s efforts to publish the Pentagon Papers. These were the State Department documents, outlining the US government’s disingenuous representation of the war in Vietnam, that rogue official Daniel Ellsberg leaked to the media in the early 1970s.

Meryl Streep is nominated as best actress for her performance as Katharine Graham, the Post’s publisher. The Post is also up for best picture.

Anyone interested in the topic should read James DiEugenio’s fascinating article, ruthlessly fact-checking the film, on Consortiumnews.com. A well-briefed expert on US politics, the author points up any number of apparent confections in the screenplay.

Graham was more experienced than the film pretends (yeah, okay). The New York Times was at least as important a player as the Washington Post (I think that’s hinted at). The scene in which Graham confronts former defence secretary Robert McNamara is fabricated and misrepresents their positions (the former I would have guessed; the latter is a little more worrying). “The Post tries to imply that the publication of the Pentagon Papers caused Watergate.” (I don’t agree.)

DiEugenio’s main objection, however, is that Spielberg and his writers didn’t tell the story he would like them to have told. “The Post only figured in the story for about two weeks,” he writes. “Yet, as we will see, the saga of the Pentagon Papers extended to well over two years.”

“As the reader can see, The Post does not come close to telling the full story about the Pentagon Papers,” he says again later. It’s not trying to do any such thing. Yes, the film is, as DiEugenio puts it, “slanted”.

The story is certainly incomplete. All stories are. The viewer of a mainstream historical film must expect partiality and constrained perspective. If you come here expecting history then you deserve to be misled.

JE Vader’s article in the Oregonian on I, Tonya is another thoroughly researched and sincere piece of writing. Under a headline including the words “I, Nauseated”, the former sports journalist details a swathe of unreliable plot turns in the study of notorious Portland-based ice skater Tonya Harding.

Featuring a smashing Oscar-nominated performance by Margot Robbie, the film – often brutal, usually very funny – outlines the classist responses to the blue-collar Harding as it leads us towards the still-disputed attack on her rival Nancy Kerrigan. Vader, who was there at the time and knows what he’s talking about, disputes the film’s argument that she was marked down in the 1994 Winter Olympics and balks at the script placing blame for the Kerrigan attack on “hapless ‘bodyguard’ Shawn Eckhardt, who, in actual life, is conveniently dead”.

I don’t doubt what Vader says, but the makers of I, Tonya could hardly make it clearer that their narrative is unreliable. After one scene of unhinged violence, someone turns to the screen and says: “This didn’t happen.” Elsewhere, a character adds a footnote to the depiction of Harding’s eccentric training procedure: “This actually happened”.

The implication is that other stuff in the film is exaggerated, distorted or plain made-up. If you want something closer to the truth then dig out Vader’s articles for the Oregonian.

He is on surer ground when he questions the choice of Tonya Harding as a heroine. “We live in a world where people line up for selfies with OJ Simpson and heavyweight rapist Mike Tyson … Why shouldn’t Tonya Harding be a new folk hero?”

Don’t forget that somebody really did assault Nancy Kerrigan with a police baton. It’s a reasonable argument but, again, this is to do with perspective rather than with the raw facts. It’s the celebration of Harding that really catches in Vader’s craw and that springs as much from Robbie’s performance as it does from the incidents depicted.

We have seen relatively few objections to the larger historical argument in Darkest Hour. There have, however, been the usual whinges about how Winston Churchill is represented. Played in fat suit and bald wig by Oscar-favourite Gary Oldman, the great walrus emerges from obscurity to secure his hold on the top job and frustrate any deal with Hitler.

The left have again pondered Churchill’s unlovely role in the maintenance of empire and launched a few reasonable calls for that story to be told instead.

Elsewhere, in the US Conservative journal National Review, Kyle Smith argues that the film does an injustice to Churchill by making him a “comical, quavering, and very human prime minister”.

Very human? Is that a bad thing? “Because an irresolute and small-minded age applies its own neuroses backward to history … movies about important historical figures have become less inspiring and ‘more human’,” Kyle argues. So, yes. It seems it is.

Most criticism around Darkest Hour has focused on a hugely dubious late scene in which Churchill gains inspiration from a racially diverse group of ordinary Londoners in a tube train. It’s a terrible sequence.

But the problem is not that it didn’t happen. The problem is that it isn’t even believable within the film’s own semi-imagined universe.

Only the more pedantic will object to the sequence in which King George VI listens live to a speech from the House of Commons on his wireless (something that couldn’t have happened for another 30 years). In that case dramatic licence has aided the smooth progress of the action. The now-infamous tube sequence would scarcely make sense in a cosy fantasy like the current Paddington 2 (a better film than Darkest Hour, but let’s not go there now).

Intelligent audiences will approach such heroic cinema – a category that includes all four films – with an attitude of healthy scepticism. They have, in the past, done the same with best picture winners such as Lawrence of Arabia, Braveheart, Patton and Chariots of Fire. All those films were packed full of infelicities. Each approached the subject from a skewed perspective. The discipline of history survived.

This is not to suggest that film-makers have no responsibility to the truth. The bizarre conspiracies spread by Oliver Stone’s reckless JFK have bedded down and festered over the last quarter of a century. There really are people who believe the New Orleans gay community killed President Kennedy. How can Stone seriously ...