Saoirse Ronan and Daniel Day-Lewis have been nominated in the leading role categories for the 2018 Oscars. Elsewhere, Breadwinner was nominated in the Animated Feature category. Video: oscar.go.com 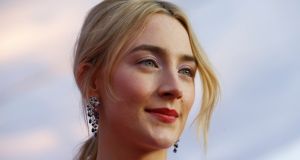 Saoirse Ronan has, as a nation hoped and expected, been nominated for Best Actress at the upcoming 2018 Academy Awards. The Irish performer becomes only the second woman – after Jennifer Lawrence – to receive three acting nominations before the age of 24.

“I am incredibly grateful to the Academy for recognising this wonderful story about the beauty and strength of women,” said Ronan. “I am especially thrilled to share this moment with Laurie Metcalf and our leader and director Greta Gerwig, who, like Lady Bird, is an incredible woman and a dear friend.”

The London-Irishman’s third feature casts McDormand as a mother who refuses to tolerate the local police force’s inaction after her daughter is raped and murdered.

When McDonagh failed to gain a nomination for Best Director today, it left the race completely open. Three Billboards scored a very impressive seven nomination, but only one film has won best picture without a director nod in the last 29 years.

The Shape of Water topped the nominations chart with a mighty 13, just one short of the all-time record of 14 equalled by La La Land last year. Dunkirk was in second place with eight.

Sometime Wicklow resident Daniel Day-Lewis is nominated as Best Actor for his performance as a manipulative fashion designer in Paul Thomas Anderson’s Phantom Thread. Day-Lewis, holder of a record three Oscars for Best Actor, has declared that this will be his last film performance.

Consolata Boyle, the unstoppable Irish costume designer, received a nomination for her work on Victoria & Abdul. This is her third Oscar nomination.

There was further good news for the domestic industry as it was confirmed that Nora Twomey’s The Breadwinner had been nominated for Best Animated Feature. This is the third nomination, following nods for The Secret of Kells and Song of the Sea, for Kilkenny’s industrious and innovative Cartoon Saloon.

“Tempted as I was to hide in a cupboard, I went upstairs to the crew room where everyone was having their tea and sandwiches and watched the live stream,” said Twomey. “I was there with a lot of people who helped make The Breadwinner here in Cartoon Saloon. I don’t think we heard anything after we heard the words ‘The Breadwinner’. There was so much screaming and shouting.

“You don’t really think about it beforehand. It will either happen or it won’t. There is no point investing yourself in that. We always knew it would be a fantastic thing to happen – particularly for an independent film without a lot of money behind it.”

Recent changes in the Oscar regulations, confirming that all Academy members, rather than just those from the more knowledgeable animation branch, can vote in his category, could have hurt the film’s chances, but The Breadwinner, which follows an Afghan girl who must dress as a boy to support her family, was of sufficient quality to win over the expanded electorate. Angelina Jolie, who acted as producer, will be among those celebrating.

The runaway favourite in that race remains, however, Pixar’s colourful, vibrant Coco.

In the Best Actor category, the veteran Gary Oldman is mentioned for his performance as Winston Churchill in Joe Wright’s Darkest Hour. Only previously nominated once, Oldman is thought to be a shoo-in for the Oscar – they love make-up, prosthetics and impersonation – but he will receive a healthy fight from Timothée Chalamet for his turn in Luca Guadagnino’s gay romance Call Me by Your Name.

Should Chalamet sneak past Oldman, he will, at 22, be the youngest actor to ever take that prize. Day-Lewis, nominated for an angular performance in a tricky film, will struggle to get past those two, more easily digestible performances.

If McDormand stumbles, Saoirse Ronan, who won Best Actress in a Comedy or Musical at the Golden Globes, is probably the most likely to take Best Actress. There are, however, strong challenges from fellow nominees Sally Hawkins, mute in The Shape of Water, and Margot Robbie, transcendent as Tonya Harding, the ice skater at the heart of a notorious 1990s scandal, in the breathtakingly busy I, Tonya.

Best Supporting Actress will surely be a battle of the moms. The hugely respected Allison Janney is nominated for her turn as Harding’s terrifying mother in I, Tonya. The equally well-liked Laurie Metcalf, a less abrasive, but still awkward parent to Ronan in Lady Bird, also received an anticipated mention. Metcalf initially looked the favourite, but, after wins at SAG and the Globes, Janney has edged ahead by a nose.

A similar argy-bargy is afoot in best supporting actor. Sam Rockwell is nominated for his turn as a racist cop in Three Billboards Outside Ebbing, Missouri. Rockwell is on a roll, but Willem Dafoe’s performance as a caring motel manager in Sean Baker’s deeply moving The Florida Project is very well liked. And Dafoe is “due”.

The Academy Awards will take place at the Dolby Theatre, Los Angeles on March 4th. Jimmy Kimmel will host for the second year running.

A Life On Our Planet: David Attenborough’s devastating but essential call to action
10