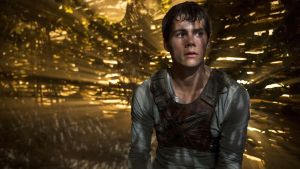 In each case (see also the useless Divergent series), the initial solid concept, told in bestselling YA novels, was largely abandoned for a series of increasingly dull sequels that disappeared elaborately up every available rear end.

As we reach the third and – thank heavens! – final episode in the Maze Runner sequence, the story has degenerated into a wearingly generic class of dystopian fantasy. You know how this goes. The misguided rulers of a damaged society speak very slowly while gazing through windows set in off-the-peg brutalist architecture. Cheapo versions of the floating advertisements from Blade Runner decorate a bland cityscape that an averagely bright 14-year-old could knock up on a mid-price laptop. The resistance plots in smoky, run-down slums. A deadly virus is turning everyone into zombies. Oh, come on! You’re not even trying here.

Most of the cast have matured into impressive grown-up actors. Kaya Scodelario is excellent as the compromised “Glader” who now seems to be collaborating with the wicked people at WCKD (it really is called that). Dylan O’Brien remains suave as the de facto leader of the posse. An opening action sequence, in which the gang attempt to rescue a colleague from a speeding train, is impressive enough to delude naive viewers into thinking they’re about to see a real film.

The Death Cure isn’t that. It’s an unavoidable consequence of an author achieving success with an entity that really doesn’t lend itself to further exploitation. It’s like that sequel to Love Story in which nobody was actually dying. Happily, the market seems to be drying up. This may be the last divergent maze game we’re asked to endure.