The last days of Robin Williams

Robin’s Wish, a new documentary, reveals the true story which led to the actor taking his own life in 2014

The official trailer for Robin's Wish, a documentary on the last days of Robin Williams before he died of diffuse Lewy body dementia, a degenerative neurological disorder which had gone undetected until his death. Video: Vertical Entertainment 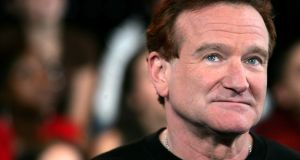 In Robin’s Wish, a documentary about the last days of Robin Williams, the comedian’s widow, Susan Schneider Williams, recalls the moment when she was called in to go over the coroner’s report on her husband’s death.

“There were no surprises about what was in his toxicology,” says Schneider Williams. “I knew my honey was clean and sober, they sat me down and said, essentially, Robin died of diffuse Lewy body dementia. They started to talk about neurodegeneration. He wasn’t in his right mind. [The coroner] described how these Lewy bodies were in nearly every region of his brain. It makes sense why he was experiencing what he was experiencing. Cognitive [function]. Moods. Movement. Depression. Fear. Anxiety. Hallucinations. Delusional thinking. Major sleep disorders. Paranoia. They were all affected. I remember walking out of that facility down the steps and feeling: now I have the name of it.”

Lewy body dementia is a degenerative neurological disorder, which, at the time of Williams’s death, had gone undetected by every doctor he had attended. The disease, which attacks the brain, left Williams prone to delusions, anxiety and tremors.

Shawn Levy, who directed Williams in the Night at the Museum trilogy, recalls that the increasingly panicked star hid a shaking arm and had trouble remembering his lines while shooting the final instalment, Night at the Museum: Secret of the Tomb.

“When Robin would call me at 10 at night, at two in the morning, at four in the morning, saying, ‘Is it usable? Is any of this usable? Do I suck? What’s going on?’” says Levy.

Schneider Williams’s appointment with the coroner was in October 2014, some months after the star took his own life on August 11th. In the days after his suicide, various unsavoury narratives emerged. Wildly speculative media reports suggested addiction or depression. Some pointed to the recent cancellation of his CBS sitcom The Crazy Ones and his waning box office appeal. Under the headline “Inside the Haunted Dark Side of America’s Funniest Man”, the National Enquirer suggested that Williams had never recovered from the death of his friend, John Belushi, and was “wrecked by years of drug and alcohol abuse”.

“You have this guy who is infinitely funny and infinitely clever and infinitely quick and smart and all of a sudden he’s just gone,” says Tylor Norwood, director of Robin’s Wish. “So after he passes, everybody in the media is sort of guessing as to what it could be. Maybe he was depressed? Maybe he was on drugs? Maybe he ran out of money. And none of that was true. I don’t think people in the media were out to destroy Robin Williams’s legacy. They had a job to do. And you’ll always find a friend of a friend of a friend who will say money troubles or depression.

“The media couldn’t know the truth if Robin himself didn’t know. Ted Turner, the great industrialist and media magnet, has Lewy body dementia. He had the experience of going around telling people: this is what’s gonna be happening to me. He’s in the late stages of it now and it’s very sad for the family. But on some level, it’s manageable if you know what the thing is. Robin never had that. Only he and his wife had the sense that something was deeply wrong but she didn’t even get the name of it until the autopsy.”

At the time of his suicide, Williams had received a recent diagnosis of Parkinson’s disease. He was told the condition was early and mild. But he knew that could not account for the symptoms he was experiencing. He asked his doctor, “Do I have Alzheimer’s? Do I have dementia? Am I schizophrenic?”

“Lewy body dementia is a devastating illness,” explains Prof Bruce Miller, director of Memory and Ageing Centre at the University of California, San Francisco and one of the scientific contributors to Robin’s Wish. “It’s a killer. It’s fast. It’s progressive. Looking at how Robin’s brain had been affected I realised that this was about as devastating a form of Lewy body dementia as I had ever seen. Almost no area was left unaffected. It really amazed me that Robin could walk or move at all.”

Robin was at the mercy of something that [he] could not control. And, even worse than not being able to control it, not even knowing about it

Robin’s Wish brings together 17 of Williams’ friends and colleagues – plus medical experts – to talk about the comedian’s decline. Many of them are speaking about his symptoms and difficulties for the first time.

“I felt like I was being loyal to him by not speaking about the struggles that we saw,” says Shawn Levy. “That it wasn’t anyone’s business. Robin was at the mercy of something that [he] could not control. And, even worse than not being able to control it, not even knowing about it.”

David E Kelly, Chicago Hope and Big Little Lies creator, says: “I think it’s important that the truth come out because there are so many affirmative things that Robin stood for and we want to believe in all of them. We want to believe in him. And there’s a danger that his suicide could occasion people to think: oh, well, he wasn’t what we thought he was. We didn’t know him after all. But we did.”

The Williams who emerges in Robin’s Wish is a warm, brilliant, generous soul who was quick to rush to the side of his college chum Christopher Reeve when the Superman star suffered a spinal cord injury after a horse riding accident.

“He was the first person to show up when I was really in trouble,” Reeve told an interviewer before his death in 2004. “He came here one afternoon and thank God there is a seatbelt in this chair because I would have fallen out laughing.”

There are some lovely moments against the greater tragedy that frames Robin’s Wish. We watch Williams improvising for the role of the Genie in Aladdin and putting the same energy and wit into weekly improv night at his local comedy club. Tellingly, he didn’t live in Hollywood, but in Marin County where he loved to go visiting neighbours and cycling with friends, a pastime he took up after the death of John Belushi.

He met his wife Susan at an Apple store; he surprised her by turning up at her next 12-step programme meeting. He loved entertaining US troops and visited Afghanistan and Iraq many times.

It’s a life and legacy, Norwood notes, that should not be overshadowed by his death. “When I was interviewing people for the film I’d ask when was the last time we put on one of his movies,” says the director. “And they would say three years ago or four years ago. Usually whatever that number was lined up perfectly with when he died. People who had this idea that they can’t go back there. That it felt weird. They had this assumption that maybe Robin wasn’t as good as the things he created. That maybe there was this darker side to him.

“That’s a narrative I think we like to put onto comedians. They’re like sad clowns in their personal lives. They’re distraught and they struggle but on stage they come to life. But that wasn’t true for Robin. There are the Chris Farrellys and John Belushis of the world. He wasn’t one of those guys. He wasn’t just this wild and crazy comedian. He had a deep connection to the soul and an ability to transmute that to us as an audience. I hope that when people see this film, that as soon as the credits are rolling, they put on Mrs Doubtfire or Hook or Good Will Hunting.”