Wild Mountain Thyme reviews are in: ‘Accents are the least of this movie’s problems’ 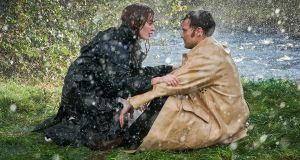 So close to parody... Emily Blunt and Jamie Dornan in Wild Mountain Thyme

It is only a few weeks since, on the basis of a brief trailer, Ireland declared John Patrick Shanley’s Wild Mountain Thyme a potential ironic classic for the ages.

Jamie Dornan and Emily Blunt play turf-crossed lovers in an adaptation of the director’s Broadway play Outside Mullingar. He falls out of coracles. She huffs in a shawl and hobnail boots. We all had great fun with the accents and even greater fun with the sentimental convolutions of Hiberno-English (so we did, so we did).

The bad news is that the film will not be available here until early in the new year, but Wild Mountain Thyme opens in the US this weekend and – keep faith, kitsch kids – the reviews have been far from kind. Interestingly, more than a few of the senior American critics reference the bellowing from across the sea.

“It started getting pushback in that country when its trailer dropped in November,” Glenn Kenny writes in the New York Times. “Film people on social media made sport with the speaking styles of its American, English and Irish cast too.”

Kenny was not quite having that.

“Playing accent police officer without qualification while watching a movie is ultimately doing it wrong. That said, motley accents are the least of this movie’s problems,” he continues. (In The Irish Times’ defence, we were reasonably forgiving of the accents in our otherwise snarky trailer review.)

David Ehrich of IndieWire, among the most influential movie sites, had also been listening to voices from what he, thank Bejaysus, doesn’t call the Emerald Isle.

“We’re talking about a movie so in love with its own lucky charms that it makes Waking Ned Devine feel like In the Name of the Father by comparison,” he writes. “Think that’s overstating the case? The National Leprechaun Museum of Ireland responded to the trailer by tweeting ‘Even we think this is a bit much.’ That was after seeing only two minutes of it; this critic has seen the other 100 as well.”

Ehrlich deserves honorary Irish citizenship for the determination with which he stuck to his task.

“The only logical explanation for what happened here is that someone planted a bomb in Shanley’s editing bay and timed it to explode if any cut of Wild Mountain Thyme dipped below 50 kilohertz of cartoon Irish charm per minute,” he concluded. “Needless to say, nobody got hurt.”

Derisive reaction to the film’s trailer suggests it’s less likely to be remembered alongside The Quiet Man than Far and Away, the 1992 Hollywoodized Oirish epic secretly dubbed by wags on the production crew as Fartin’ Away

Michael Philips at The Chicago Tribune stood up for his substantial Irish readership in the city by the lake.

“The music is drippy and constant, the wobble from comedy to drama feels off, and the dialects have been reamed in the Irish press,” he wrote.

John Patrick Shanley, who won an Oscar for writing Moonstruck, has already been involved in a little bit of advanced damage litigation. Asked about the response to the trailer in Ireland, he made a robust counter-argument. “I told Emily when we first talked about this project, ‘I’m not making this movie for the Irish. If you try to get the Irish to love you, no good will come of it. I’m making this movie for everybody else and all the people who want to go to Ireland,’” he said. That is a perfectly reasonably argument, but, so far, few of the American critics are warming either.

Chuck Bowen of Slant magazine was among those baffled by the confusing premise. Emily has always loved Jamie, but Jamie remains terrified of her very presence. Neither seems able to move forward. Bowen’s conclusion is not a happy one. “Rosemary and Anthony’s timidity is often equated to the Irish’s modesty and devotion to custom – an equivocation so naïve that it borders on condescension,” he wrote.

David Rooney, who, we’re betting, has a smidgeon of Irish blood, speaks warmly of Outside Mullingar – the setting seems to have been shifted to Mayo – in his review for trade paper The Hollywood Reporter, but he felt that the film offered “a persuasive argument against playwrights adapting their own work for the screen”.

Once again, the reviewer nodded to the negative responses in the land of his forefathers. “Derisive reaction to the film’s trailer in the Emerald Isle suggests it’s less likely to be remembered alongside The Quiet Man than Far and Away, the 1992 Hollywoodized Oirish epic with Tom Cruise and Nicole Kidman, secretly dubbed by wags on the production crew as Fartin’ Away,” he writes.

At time of writing, with a 30 per cent rating on review aggregator Rotten Tomatoes, Wild Mountain Thyme does look to heading towards the status of critical bomb. But there have been some warm responses from distinguished organs.

Gary Goldstein at the Los Angeles Times was among those giving the poor thing a break. “Wild Mountain Thyme has a lot going for it, which makes it a shame that it’s not a wholly stronger film,” he writes in faint-praise mode. “That said, as a stress-free chance to take in the lush, gorgeously green Irish countryside, you could do worse.”

Mick LaSalle at the San Francisco was less guarded in his praise. “The gentle spirit of Wild Mountain Thyme envelops us early, to the extent that, midway through, even though there is very little left to resolve, we are in its spell,” he says.

The producers will, however, have surely resigned themselves to a fallow awards season. The film is currently scheduled for release in Ireland on January 8th.

Nothing in the negative reviews will impede its chances of becoming a cult hit. “Wild Mountain Thyme transforms from a movie you watch with one eyebrow raised into one that leaves your jaw on the floor,” Katie Rife says of the final act in her review for the AV Club.

Admit it. You are intrigued.