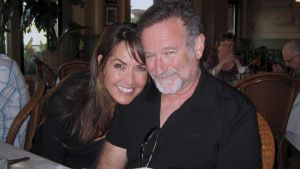 Robin Williams and his wife, Susan

The death of Robin Williams offers salutary lessons for students of modern media. In the aftermath of the announcement, reporters were quick to speculate that drugs, depression or anything else that fitted yelled headlines was to blame for his apparent suicide. Six years later, misconceptions still surround the incident. Someone, somewhere is, as you read this, peddling the “clown who cried” myth to sentimental eyeballs.

The truth proved to be both simpler and much more complicated. It was not until after his death that doctors confirmed he was suffering from Lewy body dementia, a degenerative condition related to Alzheimer’s. To that point, the only diagnosis Williams had received was for the early stages of Parkinson’s. The last six months of his life were characterised by confusion, insomnia, hallucinations and depression.

This nuts-and-bolts documentary is partly concerned with setting the record straight. Susan Williams, his wife for more than a decade, remains frustrated that they didn’t know what was happening to the entertainer. “If we’d had the accurate diagnosis of Lewy body dementia, that alone would have given him some peace,” she says. Would it? We can’t tell. But it would, at least, have given his relatives some clarity.

Shawn Levy, who directed him in the Night at the Museum films, is here to talk us through how his puzzling decline manifested itself on set. He began holding one arm differently. He had trouble remembering his lines. Much of the antic energy had gone. “I don’t know what’s going on. I’m not me anymore,” Levy remembers him saying.

Another disturbing incident found Williams become obsessively paranoid about the fate of an old pal, the comic Mort Sahl. When Susan and Robin were advised to sleep in separate beds, he looked aghast at her and said: “Does this mean we are separated?” A few years earlier this might have been a typical Williams gag. Susan now chokes up as he tells the story.

Helped out by medical experts, Tylor Norwood, a director of several independent productions, walls off certain sections for disease awareness. Dr Bruce Miller, director of the Memory and Aging Center at the University of California, San Francisco, explains how the disease spreads its confusion across the neurons. An interesting point is made about the false dichotomy made between psychological and neurological ailments. They all come from the same source.

The film also, happily, finds time in its tidy running length for a celebration of Robin Williams. The rise, fall and rise again is familiar. He was born in the midwest and secured a full scholarship to the drama school at the Juilliard School in New York, where he formed a strong friendship with Christopher Reeve. Contemporaries remember him improvising around Shakespeare texts in iambic pentameter.

He was soon drawn into the coke-fuelled world of late 1970s comedy, but, following the death of John Belushi, he cleaned up his act and matured into a pillar of the Hollywood establishment (if a pillar can be anarchic and unpredictable).

All that has been said before. Robin’s Wish does, however, offer some delightful – now poignant – recollections of his home life in Marin County. The neighbours in his exclusive maritime locale do somewhat oversell their ordinariness, but it does seem that he was part of a close community in a way that many isolated movie stars are not. He helped out at the local theatre. He was always willing to have his photograph taken.

Robin’s Wish is entirely without flash. Comprising talking heads, and featuring little archive footage from the movies, it makes its case and gets out of the way before exhausting its welcome. Fans will be happy to give it that much time.

Video on demand from January 4th