The Cave: Patriarchy is alive and well in a war zone hospital 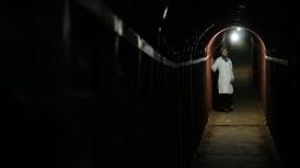 Dr Amani Ballor in The Cave

This National Geographic production has a remarkable MVP in Amani Ballor, a doctor and hospital manager operating in impossible conditions in an underground Syrian medical facility. A 30-year-old paediatrician who chose to stay behind in the al-Qaeda stronghold of Ghouta to treat children in a make-and-do hospital, she’s a remarkable presence and a heroine worthy of her family’s praise: “People will forget the war at some point but they won’t forget you.”

Sadly, the film around her – even making allowances for exceptional circumstances in which it was shot – is a series of chaotic A&E shots, punctuated by forced moments of contemplation. We are offered little by way of relationships and interactions with patients beyond bandaging and emergency treatments.  Watching anonymous child after anonymous child arrive for treatment makes for grim and frustrating viewing. We want to know who these kids are, but the film does not. It’s the very antithesis of how hospital drama – narrational or otherwise – are supposed to function.  A team of cinematographers – Muhammed Khair Al Shami, Ammar Suleiman, and Mohammed Eyad – capture images that, while often arresting, never coalesce into a satisfactory narrative.

Feras Fayyad’s follow-up to the Oscar-nominated Last Men in Aleppo, a documentary following the White Helmets, is aware that the women in the film are as besieged within their own keep as they are from without. Early on, the young husband of a patient tells Ballor that a man would do a better job, and that she should be at home. Noting that religion is a tool for men in which “they take the parts they like and ignore the parts they don’t like”, the doctor and her friends frequently rail – in private -against patriarchal oppression: “Why can’t a woman decide for herself what she wants to do?” or “Why do they have to keep making us feel inferior?”    These are good questions that remain unanswered by this uneven film.