Steven Soderbergh said he’d quit film. So why is he back?

And what is the mystery behind “Rebecca Blunt”, the unknown talent who has written his latest film? 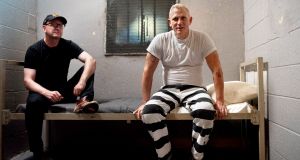 What are you doing here, Steven Soderbergh? A few years ago, the director of Sex Lies and Videotape, Traffic and the Oceans trilogy told us that he was retiring from feature film-making. He went away to make the gripping TV series The Knick. He told Liberace’s story for HBO in Behind the Candelabra. (That film counted as TV on the other side of Atlantic.) Maybe, he was just on a sabbatical.

At any rate, he is now very definitely back. Soderbergh’s Logan Lucky casts Daniel Craig, Channing Tatum and Riley Keough in a zippy heist drama set among excluded southern communities. It’s a cracker. It’s a puzzler. It’s definitely a movie.

“The only way I can walk all that back with any legitimacy is to say I didn’t want to return to the version of the film business that I left,” he says. “I needed to try something different. If it worked then it could not only mean I can start making movies again. It enabled other film-makers. We can again make movies for grown ups that get wide release, but that aren’t spectacles.”

He has a point. At some point in the last 20 years, whole classes of mainstream film found themselves being edged out of the megaplex. In 1972, pictures such as Deliverance and The Godfather were among the 10 highest grossing of the year. Such a result would now seem inconceivable.

Soderbergh’s solution has as much to do with financing as with creative decisions.

“We appropriated some ideas that have been around for a long time and combined them in a way that suits how movies are made today,” he explains. “Financing negative cost with foreign pre-sales is not new. The ancillary value of these films on streaming platforms was an important component. That finances marketing. The reality is that when the movie opens you are zeroed out. As soon as someone buys a ticket you’re in profit.”

Of course, to make this work you also have to get the movie stars to work for less than they usually make.

“Yeah, and nobody’s reps want them working for scale,” he says. “You walk into the lobby of a talent agency and realise you could land a Sikorsky helicopter in there. You then know they need money and then need it soon.”

Interviewing Steven Soderbergh is a little like attending a seminar. Upright, articulate, his head shaved and his glasses polished, he comes across like an engaged academic teaching his favourite course of the semester. He is, in fact, largely self-taught. Raised in Georgia and Louisiana, he took some film classes at high school and began shooting 16mm for fun. He then bravely headed for Hollywood and, after stints as various classes of gopher, worked his way up to editing and then directing pop videos. In 1989, when he was still in his mid-twenties, Sex, Lies and Videotape, passed out such films as Do the Right Thing and Jesus of Montreal to win the Palme d’Or at Cannes. No first film has since managed that feat.

“It wasn’t until much later that I was able to take in how crazy that was,” he says. “I came back 10 years later with The Limey and, looking at the insanity, realised how unlikely that seemed. It felt like just an unexpected thing. And I think that saved me from being ruined by it. I thought: oh well, this will help me in Europe.”

The perception was that Soderbergh then stumbled. The 1990s were taken up with a series of films – some durable, some baffling – that failed to give us the new Orson Welles we’d been promised. There were experiments such as Kafka and Schizopolis. There were lighter diversions such as King of the Hill. Then he came back with a wallop. In 1998, Out of Sight made great use of George Clooney. In 2001, he became the first man in 60 years to receive two Oscar nominations for two different films in the same year: Erin Brockovich and Traffic. He won for the latter.

“The films I made after Sex, Lies were necessary for my evolution as a film-maker,” he says. “I was still trying to work out what type of film-maker I was. I didn’t understand what place I would occupy in the business. Each was an attempt to discover that. Each was some kind of failure: critically, commercially or both. But I couldn’t have got to Out of Sight without going through that. That was a watershed project for me and George. We were both perceived as not fulfilling our potential.”

We’re still not sure what “place” Soderbergh occupies in the business. The filmography is staggeringly diverse. Those slick Oceans films, packed with stars such as Clooney, Brad Pitt and Matt Damon, delivered huge paydays for the studio. His epic two-part biopic of Che Guevara demonstrated staggering ambition. We’re not even sure what job he does. Sometimes using pseudonyms, Soderbergh often shoots, edits and produces his own work.

“It doesn’t feel like a choice to me,” he says. “Maybe it’s just an incredible lack of patience for inefficiency or stasis. I don’t know. I just really don’t understand when somebody says: ‘This is the way its always been done.’ That’s not good enough for me.”

He nods towards the West End of London on the other side of the window.

“There are certain things that do achieve a type of perfection. The black London cab. I am very sad that the ride services are undermining them. That was one of the few things on the planet that I felt achieved perfection.”

His taste for pseudonyms has left us in an unusual place with Logan Lucky. The film is written by an unknown talent named “Rebecca Blunt”. Nobody has a picture of her. The bio in the production notes is vague and jokey. Do we have a mystery here?

“I think there still is?”

Is it a pseudonym?

That wasn’t the question.

“Well, that’s my answer. I can just say this is playing exactly the way Rebecca Blunt wanted it to play out. She’s an unusual lady. At some point she’s going to talk.”

Hmm? It does sound like a pseudonym. But I don’t think it’s for him. Anyway, among other things, Ms “Blunt’s” script gives a voice to characters that rarely appear in mainstream movies. The film was written back in 2014, but this is recognisably Trump’s America. West Virginia, where the movie is set, delivered a higher percentage for the US president than any other state in the Union.

“Shooting in the fall we had no idea we’d be in this position,” he says. “I was happy there was no explicit political input in the film. Look, it doesn’t matter who the president is for these people. Nobody is going to help them. It will never change. They are marginalised, forgotten. The Democrats didn’t help them either.”

Soderbergh hoped that those rural communities would turn out for Logan Lucky. They haven’t. Most of the tickets sold have been in the metrosexual coastal cities. And there weren’t too many sold there. Maybe theatrical exhibition is just withering. Soderbergh doesn’t buy that. He explains that movies are still the main “date destination”. He believes in the communal experience. But he’s talking himself down an unhappy path.

“Unfortunately – I don’t know how it is in Ireland – but it’s not always a pleasant thing to go to a movie with a lot of people, because they’re fucking talking and they’re fucking texting. That makes me crazy.”

Soderbergh is already exploring all the available options. His new show for HBO, Mosaic, works with an app that allows the viewer some sort of still-uncertain interaction. We also hear that Unsane, a movie featuring Claire Foy and Juno Temple, has been shot with his phone.

Established the career of James Spader and Andie MacDowell. Helped kick off the indie boom in the early 1990s. So, it matters.

With one sexy, sassy bound, both George Clooney and Steven Soderbergh were free from their supposed career slumps. Also started the lengthy collaboration with Northern Irish musician David Holmes.

Adapted from a Channel 4 TV series, this sprawling multi-stranded narrative sought to investigate ever corner of the drug trade. The director and Benicio del Toro won Oscars.

Undervalued for the crime of not being Andrei Tarkovsky’s adaptation of the titular Stanislaw Lem novel. Soderbergh’s version – with Clooney as the haunted astronaut – is leaner and more focussed.

Funny, moving account of the relationship between Libarace and Scott Thorson. Michael Douglas and Matt Damon excel in the main roles.

Corey Taylor: After 20 years in Slipknot we are all beat up
9 41 members of Sinn Fein ardchomhairle
10