Detroit review: The victims get lost in the roar of the riot 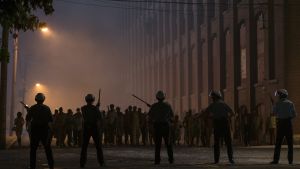 The actual stand-off in ‘Detroit’ is a virtuoso piece of filmmaking, and a harrowing, unbearable art-horror set-piece

The 1967 Detroit riot began when police raided an unlicensed club during a celebration for returning black veterans, and ended four days later, with 43 fatalities, 1,189 injuries, more than 7,200 arrests, and the destruction of more than 2,000 buildings.

During the unrest, the police laid siege to the Algiers Hotel, looking for a sniper, having been attracted by the pops of a miniature starter pistol. Three teenagers were killed and nine other civilians were brutalised by police during that incident. Charges were filed against three officers and an unfortunate black security guard, who arrived on the scene hoping to diffuse the racially charged atmosphere. No one has even been found guilty.

Some have questioned a white filmmaker and white screenwriter taking on such material. That flimsy criticism, alas, is the least of Detroit’s problems. Closing credits frame the film as a corrective to historical injustice, an effort that must be applauded. Yet Mark Boal’s screenplay, as drawn from documents, police files, and historical record – including John Hersey’s book The Algiers Motel Incident – fails to adequately represent the victims, while carefully delineating the racist cops: Poulter, in an audacious piece of counter-casting, is the worst of the bunch; Jack Reynor, brilliantly channelling Fr Dougal, is the dumbest; Ben O’Toole is the most unpredictable.

It’s unfortunate that the film changes the names and fictionalises and amalgamates the perpetrators, an obfuscation that works to diminish their historical responsibility. The actual stand-off is as brutal and nerve-wracking as any recent sequence in Hollywood cinema, a characteristically virtuoso piece of filmmaking from Bigelow, and a harrowing, unbearable art-horror set-piece.

Making spectacle or entertainment of such an event remains ethically problematic and exploitative, especially when the film constructed around the racial violence is so poor. That various, mostly passive black characters are introduced in muddled opening scenes only chimes with law enforcements’ dim view of them. (And they’re still more rounded than the film’s underdeveloped female characters, whose historical ordeal at the Algiers Hotel has been inexplicably toned down for dramatic purposes).

A court sequence in the third act wouldn’t cut it in a later, lesser episode of Matlock. The dialogue, which loudly insists on its contemporary relevance and parallels with Black Lives Matter, is achingly anachronistic. The choice to use archive materials, alongside the nimble cinematography of Paul Greengrass regular Barry Ackroyd, makes for a disconcerting Frankenstein docu-drama and repeatedly takes the viewer out of the film.

It’s an admirably worthy project, but not nearly as worthy of your time as it ought to be.