Logan Lucky review: Steven Soderbergh back with a bang and a clang

It doesn’t all work, but the unique film-maker’s return is a qualified triumph 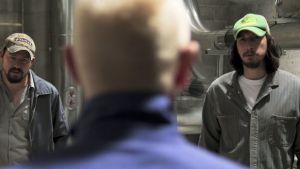 Because Steven Soderbergh is who he is we tend always to wonder what else is going on in his films. Even superficial money vacuums such as the Oceans pictures are enjoying conversations with themselves and suave film history (to a quite exhausting extent in Oceans Twelve). The breakneck The Informant! worked as a tribute to Dick Lester.

Working from a script by the literally unknown Rebecca Blunt – Soderbergh refuses to say whether that’s a pseudonym – Logan Lucky allows its subtexts to poke through right from the beginning. The perennially charming Channing Tatum plays Jimmy Logan, a construction worker who gets sacked because his limp constitutes a potentially troublesome “pre-existing condition”. The nod to the ongoing debates over healthcare in the US could hardly be more explicit. Jimmy and his family, allegedly cursed with bad luck, live and work in the southern state of West Virginia. No other state in the union voted so heavily for Donald Trump in the 2016 election.

They move through what – if handled less affectionately and conceived more recently than 2014 – might come across as a liberal parody of the Trumpian demographic. Country music is on the radio. At a fair the visitors throw lavatory seats rather than horseshoes. Jimmy eventually comes up with a scheme to rob a huge car-racing track while a major Nascar event is taking place. Katherine Waterston has a cameo as an old chum who now works in a mobile healthcare facility.

Politics are, however, scarcely mentioned. The film likes its characters and allows them to be themselves. Jimmy’s brother, Clyde (Adam Driver), who lost an arm in Iraq, works as a bartender in a local dive. His sister, Mellie (Riley Keough), is a hairdresser. More trusting of hare-brained schemes than seems plausible, they get drawn into Jimmy’s plot to access the pneumatic tubes that move cash beneath the Charlotte Motor Speedway. Desperate for the assistance of Joe Bang (Daniel Craig), an imprisoned safe-cracker, they plan to break him out and then slip him back before anybody notices.

Almost none of this would work. The script punches home the artificiality by allowing Jimmy a list, stuck conspicuously to a wall, of the essential things any robber must remember. You are urged to keep an eye on the last one if you are interested in making some sense of a confusing final plot swerve.

The script does not progress like any sort of well-oiled machine. Bits fall off when it hits a bend. There’s a worrying clanking noise throughout. But it does accommodate terrific set-pieces and continuous amusing interaction between actors who have all been cunningly cast. (Note that Riley Keough, the granddaughter of Elvis, constitutes a class of royalty in this environment.)

As he prepares to enter, ahem, Bondage one more time, Daniel Craig seems positively liberated. All blond hair and chain-gang jumpsuit, his southern accent apparently flawless, he tempers aggression with rough, old-school charm. “Ah am in-car-cer-at-ed!” he says disbelievingly to Jimmy when the plan is first hatched. Cast this man in a western during the next Bond hiatus. Two second-generation stars, Brian Gleeson and Jack Quaid, ham it up amusingly as attendant idiots. Adam Driver is not stretched as a lugubrious eccentric.

As with so many Soderbergh joints, there is a conflicting sense of something that has been rigorously planned and yet still feels slightly unfinished. Acting as his own pseudonymous cinematographer, he finds endless striking close-ups of his many arresting faces. The action sequences have unstoppable momentum. But at times Logan Lucky feels like an exercise.

Heck, it still remains a hoot throughout. Why complain? A singular film-maker returns from a cinematic sabbatical in qualified triumph. We’re lucky to have him.