Quest review: a portrait of real black lives in the Obama years

The official trailer for fly-on-the wall documentary 'Quest', which presents a portrait of real black lives during the Obama years. 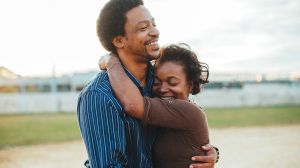 As America lunges sickeningly through yet another racial nightmare, we are offered a timely pocket epic from north Philadelphia on the Obama years.

Jonathan Olshefski is clearly a disciplined fellow. Beginning as Obama was tussling with John McCain and ending during the rise of Trump, the documentarian followed the few ups and many downs of Christopher and Christine’a Rainey. Christopher is a rapper – performing as “Quest” – who also runs a studio for the local up-and-coming talent. Christine’a works at a shelter for abused women. The director, who accumulated 100 hours of footage, could surely have fashioned a TV series from the material. Instead, he has given us a gripping, moving documentary of impressively modest length. Sometimes the time-shifts are jarring – years pass in a single edit – but the personalities are sufficiently strong to hold the narrative together.

It is a rare fly-on-the wall documentary that doesn’t generate some ethical dilemmas. Olshefski had chosen his subjects well. Living from paycheck to paycheck, the couple have their fallings-out, but remain on sound terms throughout. The news that Christine’a’s eldest son is receiving treatment for a brain tumour adds further poignancy to the narrative. The documentary really finds its fulcrum, however, when the couple’s daughter, the funny, smart PJ, loses her eye in a neighbourhood shooting. There’s an awkward quandary in there. Would we be seeing the film here if PJ hadn’t got caught in the crossfire?

No matter. The film remains responsible and cautious throughout. The public blends with the personal as the characters sigh helplessly at the TV while one wave of politicians leads onto another. Quest adopts some surprising angles. We hear African-Americans questioning the status of Jay-Z as a community leader. We see at least one random stop-and-search by police, but the film is otherwise surprisingly warm about the local officers. The white policeman who dealt with PJ becomes a friend.

We end with Trump caricaturing African-American quarters as a type of hell. The rejoinder is in the film and in the character of its subjects.