The official trailer for James Cameron's Terminator 2 which is being rrestored and re-upholstered as T2:3D. 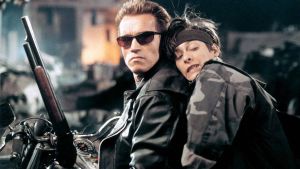 Roger Corman graduate James Cameron was working on the fraught, troubled set of Piranha II: The Spawning when, in a fever, he dreamt of a metallic torso dragging itself from an explosion. The resulting 1984 movie – in which a killer robot from the future is sent back in time – could easily have worked as a Corman B picture. Instead, it became a gargantuan hit and kick-started a multi-billion dollar franchise. By the time Terminator 2 premiered in 1991, it was a major cultural event, and the biggest grossing movie of the year.

Forget Titanic and Avatar. James Cameron’s gift for stone-stepping from set-up to pay-off is best showcased in Aliens (1986) and in this carefully curated time capsule from the pre-grunge 1990s. Between the Proustian ripples inspired by Guns N’ Roses, Pepsi Cola, floppy fringes, arcade games and, lest we forget, Arnold Schwarzenegger at the height of his powers, older viewers will be glad to note that this beautifully scrubbed new edition has aged rather well. That is thanks largely to the film’s reliance on Stan Winston and robotics, rather than CG.

A pedant might wonder why Linda Hamilton’s character wavers between scaredy-cat and badass or why Arnie’s robo-guardian sometimes takes things literally and sometimes delivers one-liners. Continuity geeks may lament the fixing of one of Cameron’s most famous gaffs.

But almost everyone will agree that the retrospective 3D spit and polish was not a particularly good idea. Sure, T2 looks pristine. The 3D – disappointingly for those hoping to duck when a liquid metal arm-hook swipes into the auditorium – is the careful, immersive (and rather pointless) kind. The brightness loss, however, is unforgivable. Southern California and New Mexico take on the grey gloom of the midlands in midwinter. Peak from behind your glasses and there’s an entirely different film playing.

Cameron tells us he’s experimenting with higher frame ratios to eliminate the need for 3D glasses and to counter brightness loss in the incoming Avatar sequels. These innovations can’t come soon enough. It’s nice to see this oldie back on the big screen, nonetheless.