After months of teasing, Daniel Craig confirmed in an interview on the Stephen Colbert Show that he will be returning to the tux. Video: The Late Show with Stephen Colbert 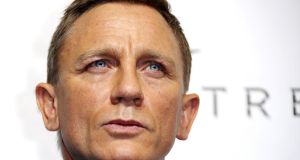 Daniel Craig on the red carpet at the French premiere of tpectre in 2015. He’ll be getting his suit out again so. Photograph: Benoit Tessier/Reuters

The worst kept secret in the entertainment industry is finally out. Daniel Craig has confirmed that he will be playing James Bond in the upcoming 125th episode of the spying and shagging cycle. Sorry, that should be “25th episode”. It just feels as if we’ve been watching these things since the sacking of Rome.

Craig ended months of teasing in an interview on the Stephen Colbert Show. There to promote Steven Soderbergh’s upcoming Logan Lucky, the actor acknowledged that the endless dodging had been getting him down. “I have been quite cagey about it,” he said. “I have been doing interviews all day and people have been asking me and I think I’ve been rather coy. But kind of felt like if I was going to speak the truth I should speak truth to you.” He finally delivered a straight “yes” when Colbert asked if he was returning.

Rumours that he had signed on for two films were scuppered. “I think this is it. I just want to go out on a high note and I can’t wait,” he said. The notion, bandied in less reliable Bondian circles, that he was being paid $150 million for a brace of films never seemed likely.

How the winds have changed. When Spectre emerged two years ago, most Bond watchers felt we’d seen the last of Craig. It is true that his initial contract was for five pictures and that Spectre was only his fourth, but Eon Productions, keepers of the Bond flame, would be unlikely to force a publically reluctant actor to make a fifth episode. (Craig is already far from the warmest personality on Bond publicity junkets.)

The end of Spectre saw the current 007 literally walking into the horizon after a set-piece in which he confronted images of all villains in his tenure. The word “valedictory” looked to cover it. Craig’s later comment that he would rather “slit his wrists” than do another Bond should not have been taken too seriously. He seemed to be addressing the suggestion of starting one that very week. But it did, nonetheless, encourage gossip that he was less than eager for a return.

Over the succeeding year or two, Craig’s position softened. “As far as I’m concerned, I’ve got the best job in the world,” he said last October. “I’ll keep doing it as long as I still get a kick out of it. If I were to stop doing it, I would miss it terribly.” A few weeks ago it was announced that “Bond 25” would hit US cinemas in November 2019. No statement emerged about Craig’s position, but the New York Times went all Deep Throat and reported that two sources had confirmed: “Mr Craig’s return is a done deal.”

The delay in confirmation may have come down to pesky legal shenanigans. The people at Eon and MGM – which is also still connected to the franchise – will want to have delayed their announcement until all the documents have been finalised. Remember that Sony’s contract to produce and distribute expired with Spectre. The Eon/MGM axis is currently dangling the franchise before such suitors as Warners, Fox and newcomers Annapurna Productions. It is equally likely that the announcement was knitted into a complex mass of publicity choreography. They usually call a massive press conference merely to announce the title of these things.

Craig’s casual admission to Colbert looks a little like a break with recent tradition. Or does it? It’s easy to forget that, despite all the gossip, there was never officially a vacancy. Barbara Broccoli, the persuasive producer of the Bond films (daughter of the series’ originator Cubby Broccoli), has always said that she was happy with the incumbent.

We will never know for certain if Craig really did have a change of heart. But we can speculate. After the rave reviews for Skyfall, the critics received the messy Spectre with some indifference. He now has another chance to, as he told Colbert, “go out on a high note”.

Neil Purvis and Robert Wade, both Bond veterans, are currently writing a script for his final flurry. The trade papers are awash with gossip about a director to succeed Sam Mendes. Deadline Hollywood (which may know nothing) lists Yann Demange, Denis Villeneuve and David Mackenzie as the favourites. Demange showed a gift for action on ‘71. Mackenzie stepped up a gear with Hell or High Water. Villeneuve, the tastiest option, will soon follow up his Oscar-nominated Arrival with Blade Runner 2049.

Today’s news does finally scupper the chances of a few older pretenders to Craig’s crown. Idris Elba, long rumoured as a potential Bond, will be the wrong side of 45 when Bond 26 grinds into gear. So, he can forget it. You can already get unreasonably tight odds on Tom Hardy, Jack Huston and James Norton. Clondalkin man Aidan Turner looks nicely positioned. Am I talking about this already? Just shoot me with a Walther PPK, why don’t you.