Steve Carell: Some people sprint to the top. For me it happened over years. I didn’t notice

The actor on hitting every rung on the Hollywood ladder 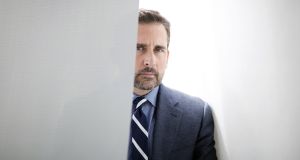 Eight years ago the actor Steve Carell went into a recording booth to adopt a cod eastern European accent for the first time. The role was Gru, the hero of Despicable Me, a villain who warms to the three orphan girls he adopts, initially as part of a nefarious scheme. The 2010 animation went on to make more than $540 million from a comparatively small $69 million budget. That was more than enough to greenlight Despicable Me 2, a film that scared up almost $1 billion at the box office, two Academy Award nominations and a monster 13.9 million-unit-shifting hit in Pharrell Williams’s Happy.

Since then, the Despicable Me sequence has overtaken the boy racers of Fast & Furious to become Universal’s most profitable franchise, a sandbox replete with branded bananas, backpacks, Monopoly boards and an estimated $70 million a year in plush toys and apparel.

It’s a properly yellow fever. The Minions 2015 spin-off movie cruised past the $1.1 billion mark in global ticket sales. The gang get their own sequel in 2020 and enjoy a bigger ensemble role in this summer’s Despicable Me 3.

Steve Carell shakes his head in disbelief. “Not in a million years,” says the actor. “I don’t even think the creators had any sort of notion this would happen, that it would be anywhere near as successful, with all these products. It’s stunning that it turned into what it did.”

When they first described the character of Gru to me, I thought it was a bold move that the villain was the star

He partly attributes the success to the upstaging antics of the minions (“Long may they continue to upstage me”), but there’s more to it, he suspects.

“I remember seeing the first one at a test screening with kids,” he recalls. “It was incomplete at that point. But I liked it. And I sensed that it was something sort of unique. It had a different feel to it. The animation was different. The tone was different. It didn’t condescend to children. It assumed they were more sophisticated than some family films do. When they first described the character of Gru to me, I thought it was a bold move that the villain was the star of the film. But there’s a kindness to him too. He is naughty. But he’s a good person. So the trick was to not make him truly evil. And I think they achieved that.”

The voice of Gru

Carell is cautious about doing the voice in public, although he did appear in character on The Ellen DeGeneres Show in 2013. For some fans it’s a bit like being told that Santa isn’t real, he fears. “Sometimes it’s too off-putting if people hear that voice coming from me,” says the actor. “Because it’s like hearing the voice from the wrong body. I have to be careful when to use it. Because I don’t want to ruin it for anyone.”

Back in 2013, Carell’s Gru erroneously informed Ellen that he was from Albuquerque, New Mexico. But now the truth behind Gru’s origins is finally revealed. Despicable Me 3 sees Carell assume dual responsibilities as Gru, now an agent for the Anti-Villain League, and as Dru, Gru’s long-lost twin and a pig-farming mogul from Freedonia. Might this be the same Freedonia that was presided over by Groucho Marx in Duck Soup (1933)?

“I think there’s a nod to that,” says Carell. “In a lot of ways, the minions are the Marx brothers. They’re the comedic descendants.”

The journey to stardom

Carell was pleasantly surprised when Despicable Me took off, but has been positively flabbergasted by his own career. Having spent a decade with various theatre and improv companies, including the Chicago troupe The Second City, the actor landed a job with The Daily Show in 1998.

Since then, the hits have just kept on coming. In 2004 he was cast in the Ricky Gervais role in the US transfer of The Office and debuted the beloved, boneheaded Brick in Anchorman: The Legend of Ron Burgundy. In 2005 he scored a $177.4 million hit as the star and cowriter of The 40-Year-Old Virgin.

He has subsequently amassed more than five million followers on Twitter and an estimated $50 million fortune through a string of mainstream hits, including Get Smart, Date Night, Crazy, Stupid, Love and Horton Hears a Who. Not bad for someone who was never interested in fame, and who looks positively mortified when I mention that various media outlets have lately been reappraising him as a “silver fox”.

Some people sprint to the top. For me it happened over years. I didn’t notice

“My goal was to make a living,” says the Massachusetts-born actor. “That, to me defined success as an actor. That was really all I was ever aiming for. That was why I moved to Chicago before Los Angeles or New York. I just figured I could work in Chicago. I could get experience and try to get better.”

Carell was raised in an ordinary middle-class sort of home. His dad was an electrical engineer. His mom was a psychiatric nurse. A brief biographical scan suggests that he was - nothing about the grown Carell suggests otherwise - the most assiduous and responsible of young men. He played the fife. He enjoyed lacrosse. He was even involved in military re-enactment - “They have a geeky rap, but they loved sharing knowledge,” he recalls - before taking a history degree at Denison University.

That sober work ethic held him in good stead.

“I can look back now on certain auditions and certain breaks that I had – like the first TV show I got was The Dana Carvey Show – and I realise how fortunate I was to be hired. They were all rungs of the ladder. Some people sprint to the top. For me it happened over years. I didn’t notice. I just wanted to keep working.”

In a Hollywood where nice guys such as Dwayne Johnson, Chris Pratt and Hugh Jackman no longer finish last, Carell is famously the nicest of the lot, a Catholic family man described by his pal and former Daily Show costar Jon Stewart as “kindness at the heart of darkness”. Almost predictably, when he and his wife, the Saturday Night Light alumnus Nancy Carell created the police procedural spoof Angie Tribeca, it was as a vehicle for somebody else (the couple’s former Office costar Rashida Jones).

“I know some couples working together can be trouble,” he says. “Some relationships can’t bear that kind of weight. But for us it didn’t feel like weight at all. It just felt like an extension of what we do anyway: have fun together and make each other laugh.”

Carell’s niceness and comedic skills have informed some interesting counter-casting. In 2014 he was nominated for an Academy Award for his thoroughly creepy turn as the wrestling coach and convicted murderer John du Pont in Foxcatcher.

Last year he appeared in The Big Short as an eccentric fictionalised version of Steve Eisman, the investor who shorted subprime home mortgages. After Despicable Me 3, he’ll appear in Battle of the Sexes as Bobby Riggs, the tennis player who goaded Billie Jean King into a winner-takes-all match in 1973. The project, scheduled for an autumn release, reunites Carell with Little Miss Sunshine directors Jonathan Dayton and Valerie Faris.

“I was very surprised to be cast in something like Foxcatcher because I don’t think anyone – including me – had imagined me in that sort of role before,” he says. “Same thing with The Big Short. A Wall Street wizard who has an abundance of overconfidence? Me?”

They are all rather abrasive people.

“It’s just happened that way. Although I think John du Pont is not necessarily abrasive. He’s a really damaged guy. Bobby Riggs is interesting. Because he’s very abrasive on the surface but that’s an act. He’s a showman.”

I don’t think I’m that highly recognisable. It’s all pretty low-key when I’m walking around

On his most recent appearance on The Graham Norton Show, Carell told a story about waving, at his wife’s behest, at a celebrity-spotting tour bus in Hollywood. Nobody recognised him. His comic skills, too, are deadpan. (Remember that poker-faced push against Ricky Gervais when the latter introduced him as “ungrateful” at the 2011 Golden Globes ceremony?)

“I don’t think I’m that highly recognisable,” he says. “Sometimes someone knows me from The Office. Or The 40-Year-Old Virgin. But it’s all pretty low-key when I’m walking around.”

Shouldn’t he invest in an entourage and bodyguards to drum up some interest?