'Brexit is going to be a land of milk and honey. Or the apocalypse'

Ross Noble on Brexit, his house burning down, and why he is in so many Irish horror films 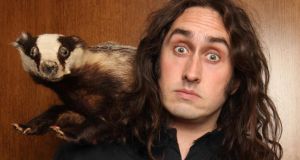 The son of teachers, Ross Noble turned to performance at about the same time that he was diagnosed with dyslexia

Ross Noble likes to talk. He does it for a living, of course. The Geordie comedian famously improvises his sets from a few basic notions. The momentum can take him almost anywhere.

“Something can happen to me in the afternoon and I can go on stage and talk about it,” he says. “Some people will write that down. But I can do that while I am on stage. Being in the moment is important.”

The act is, on the evidence of a personal encounter with Ross, an extension of his day-to-day life. Wind him up and let him go. Just watch him on last week’s Have I Got News For You. The show was recorded at 10 o’clock in the morning on the day after the UK general election.

“We were talking about what we’d been watching for the last 12 hours,” he says. “Anyone who was in the studio to watch that show wanted to be there. There was that sense of ‘this has just happened’ rather than ‘this has happened over the last few hours’.”

He goes on to ponder the lazy preconceptions about the campaign and to praise Jeremy Corbyn’s emphasis on policy over personality. If I wrote all this down there’d be enough for a small book.

“I can’t stand that horrible old cliché: ‘I never vote because they’re all the same.’ They’re so far apart now nobody can say that. Ha ha.”

The son of teachers, Ross Noble turned to performance at about the same time that he was diagnosed with dyslexia. He spent a while perfecting circus skills and enjoyed himself in youth theatre. He was as young as 15 when he delivered his first, deliciously rambling stream of consciousness in a comedy club. By the turn of the century he had become something of a legend among his peers.

At that stage, comedians were beginning to be sucked into appearing on endless panel shows. Have I Got News for You and QI aside, Noble tended to stay away from that circuit.

“I’ll have to watch what I say because I got in trouble for talking about that,” he says before saying plenty. “To be fair, I think that since the BBC changed the rules to include more women they have got more diverse. That’s great. But there are some channels where you find overt sexism dressed up as a bit of banter. I’d better be careful . . . ”

Bizarrely, Noble’s career in film has been confined almost solely to Irish horror. Five years ago he was a deadly clown in Conor McMahon’s Stitches. This week he returns in a straight role as an orderly in Dennis Bartok’s hospital horror Nails. How did that happen?

“I don’t know. They have coined that term ‘Bollywood’. Has anybody coined a term for the Irish horror scene? What’s interesting about Ireland is you have these world-class crews who move from giant Hollywood films to interesting smaller films. And I love horror. So just put the two things together.”

It seems as if Noble is now making a bit of a lunge towards acting. He has the presence for it. With his long, drooping face and dark, exotic colouring, he catches the attention before he speaks a word. In a few months he will go before West End audiences as Igor in the musical version of Mel Brooks’s Young Frankenstein. He seems simultaneously thrilled and terrified.

“I am going to be working on that for six months,” he says. “That is going to be so different from what I normally do. Mind you, it’s by possibly the greatest living comedy writer. I have to be word for word. I have to sing. I have to dance. That is the most focused I have ever had to be. Best of both worlds.”

Noble has had a complicated domestic life over the past decade. In 2009, voracious bush fires destroyed his family home in the outskirts of Melbourne. He and his children – who were unharmed – subsequently moved back to England. They’ve settled. But he’s not sure they’ll be there forever.

So he may not be in England forever?

“Every time we have a shitty winter I think about that. Mind you, Australia does have a tendency to burst into flame. We’ll see.”

Bill Travers
Actually from Sunderland. Many Wearside folk now reject the term “Geordie”. But the rugged star of Born Free was described as such in his prime.

Janet McTeer
Born in Wallsend, McTeer got an Oscar nomination for Tumbleweeds back in 1999. Has since excelled as Clementine Churchill in Into the Storm and Hubert in Albert Nobbs.

Andrea Riseborough
Although not quite a movie star, the Newcastle native is a contender for the best British actress of her generation. Stunningly good in Shadow Dancer. Will soon be seen as Svetlana Alliluyeva, daughter of Stalin, in Armando Iannucci’s The Death of Stalin.

Charlie Hunnam
What a strange trip it’s been. We first saw him as the frail young hero of Nicholas Nickleby. Then he became a hulk in King Arthur and Pacific Rim. Currently remaking Papillon alongside Rami Malek.

Greg Wise
The great big handsome fellow who played Mr Willoughby in Ang Lee’s Sense and Sensibility. Has been married to Emma Thompson since 2003.

Patrick Kielty: ‘We weren’t sure how many people would turn up – 400 queued around the corner’
8

TV Guide: 25 of the best shows to watch this week
9