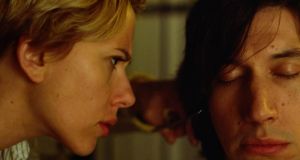 Just somebody that I used to know: Scarlett Johansson and Adam Driver in Marriage Story

MARRIAGE STORY ★★★★★
Directed by Noah Baumbach. Starring Scarlett Johansson, Adam Driver, Laura Dern, Alan Alda, Ray Liotta, Julie Hagerty, Merritt Wever. 15A cert, gen release, 136 min
Charlie (Driver), a theatre director, and Nicole (Johansson), an actor, are hacking their way through a particularly bloody divorce. He has remained in Brooklyn; she has moved to Los Angeles. They start out playing nice, but when lawyers get involved the gloves come off. Baumbach’s best film yet combines his taste for insidious comedy and upper-class Boho angst to endlessly diverting effect. The dialogue sparkles. The actors play skilfully off one another. Humour colours every bitter moment. An absolute marvel that should not be missed. Full review DC

Called Ford v Ferrari in the US, Mangold’s zippy film details, yes, the Ford Motor Company’s efforts to win the 24 Hours of Le Mans in 1966. Bale is the iconoclastic British driver. Damon is the iconoclastic designer. Here is a big, sweaty, oily film that relaxes without apology into an aesthetic that was already under stress 50 years ago. Pull up a chair and watch the manly men bicker, race and fight. Miss Le Mans ’66 and, well, there probably won’t be another one along in a minute. Full review DC

Busy Adam Driver is intense as Daniel J Jones, the Senate investigator tasked with looking into the CIA’s “enhanced interrogation techniques” (that’s “torture” to you and me) in the aftermath of 9/11. Hitherto best known as a screenwriter for Steven Soderbergh, Burns eschews any romantic subplot for an intense focus on Jones’ burrow through the archives. The results are occasionally austere, but the data-drop remains fascinating throughout. Comparisons with the great 1970s conspiracy thrillers are justified. Full review DC

When it was announced that Scorsese was to reunite with De Niro and Pesci (and belatedly invite Pacino into the Family) for a tale of postwar gangsterism, premature comparisons were, not unreasonably, drawn with Casino and Goodfellas. The master’s study of hitman Frank Sheehan is, however, in a very different mood: subdued, unhurried, wintery. The digital de-aging is occasionally a distraction, but the gorgeous performance and rigorous period detail are (ahem) to die for. Pacino is a standout as union boss Jimmy Hoffa. Full review DC

At 17, Luce (Harrison) is a dashing high schooler, as admired on the track as he is on the debate team. Luce’s charms are challenged by his prickly African-American history teacher (Spencer), who calls on Luce’s Caucasian parents (Watts, and Roth) after he writes an essay on the Pan-African activist Frantz Fanon. She is equally alarmed by a bag of illegal fireworks she has found in Luce’s locker. The boy, we learn, was adopted from war-torn Eritrea, where he was a child soldier. His parents have seen him through years of therapy and rehab. Is the teacher, knowing Luce’s personal history, simply projecting? Is she being overly hard on him because he’s African-American? Or is something genuinely sinister going on? A provocative film to mull over. Full review TB

Lord of the Flies is an obvious reference for this nervy, thrilling tale of child guerilla soldiers. But there’s also something Aguirre, the Wrath of God in Colombian director Landes’ surreal, wildly beautiful third feature. The near feral teenage commandos, known only by their nicknames (Dog, Bigfoot, Rambo, Swede, Smurf, Boom Boom), take their orders from The Messenger (Salazar), who represents a mysterious paramilitary called The Organisation. When two of the Monos, Lady (Quintero) and Wolf (Giraldo), are tasked with watching over an American prisoner (Nicholson) and a cow called Shakira, a series of events implodes their rough society. Easily one of the best films of 2019. Full review TB

Other ★★★★★ and ★★★★☆ films out and about: The Aeronauts, Brittany Runs a Marathon, The Farewell, Joker, The Last Black Man in San Francisco, Lost Lives, A Shaun the Sheep Movie: Farmageddon, Sorry We Missed You. All current synopses here