Review: Not a single joke works in this confusing tribute to fandom of Love Actually 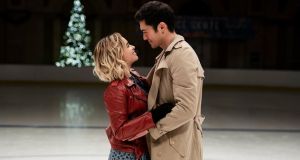 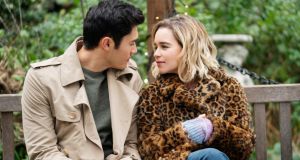 Tom (Henry Golding), a Manic Pixie Dream Boy who dances down alleyways and offers swoony, life-altering advice like “Look up”.

Lots of people you know and likely love have come together to make a film that will inspire you, against your better instincts, to nod in agreement upon seeing smutty right-wing British tabloids having a pop at “Remoaner Emma Thompson’s terrible new film”.

Last Christmas was, indeed, written by the much-admired Ms Thompson and performance artist Bryony Kimmings. As the title indicates, the film is inspired by the songs of the late George Michael and is also, confusingly, a tribute to the recent, deluded fandom around Richard Curtis’s Love, Actually. (Why let low quality get in the way of Gen X nostalgia addiction?)

Not a single joke lands as cutesy Kate (Emilia Clarke), an elf in a year-round London Xmas store with West End dreams, meets Tom (Henry Golding), a Manic Pixie Dream Boy who dances down alleyways and offers swoony, life-altering advice like “Look up”.

Back at home, Kate struggles with an overprotective Croatian mother (Emma Thompson channelling Maureen Lipman with none of the fun) and her Brexit-induced possibility of being deported.

Other stock comic characters appear: including Michelle Yeoh’s stern-but-soft-really boss, bantering bobbies on the beat, and fun homeless people who look to have actual Dickensian grime smeared on.

Kate moves on from being a careless picker-up of strangers in bars, but her progression is hindered by Tom’s mysterious disappearances. And here comes the 1950s melodrama plot twist.

We have (some) good tidings.Unlike the Curtis films it seeks to emulate, Last Christmas is rightly multicultural and inclusive. Bridesmaids director Paul Feig finds delightful nooks and crannies to explore in a wonderfully Christmassy London. Clarke and Golding are extravagantly charming and pretty.

The script, however, is simply not there. A love-at-first-sight sub-plot concerning Yeoh (one of many criminally squandered actors) and Borgen’s Peter Mygind is so broad it makes Pepe le Pew look like a Ken Loach film.

At least half of the dialogue sounds like someone held the relevant actor’s family at gunpoint and ordered them to speak random words. And worse, George Michael’s music is never properly integrated into the film. In common with much of the film, it’s just there, in big seasonal splat.