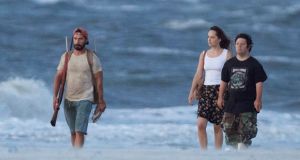 THE PEANUT BUTTER FALCON ★★★★☆
Directed by Tyler Nilson and Michael Schwartz. Starring Shia LaBeouf, Zack Gottsagen, Dakota Johnson, John Hawkes, Bruce Dern, Jon Bernthal, Thomas Haden Church. 12A cert, gen release, 97 min
Zak (Gottsagen), a 22-year-old with Down syndrome, lives in a retirement home where his attempts to leave are thwarted by kindly (if exasperated) Eleanor (Johnson). With the help of his mischievous roommate (Dern), wannabe wrestler Zak breaks out and heads cross-country in order to track down his wrestling hero (Church). Along the way, he befriends Tyler (LaBoeuf), a troubled petty thief who has fallen foul of local crabbers. With more than a nod to Huckleberry Finn, Zak, Tyler and eventually Eleanor make their way downriver on a raft. Zack Gottsagen is the first Down syndrome lead in a hit summer picture, and he more than holds his own against an extravagantly gifted ensemble. Full review TB

Artist and politician Mannix Flynn meets with generations of his family, who recount their harrowing childhood experiences in religious-run homes and industrial schools, institutions where sexual and physical abuse was common. Some members of the family have previously given evidence to various State-backed enquiries, and some are speaking about the abuses they suffered for the first time. The extent of those abuses, as visited upon one family, is difficult to comprehend. A vital chronicle. Full review TB

Popular anarcho-primitivism icon Shaun the Sheep is, as ever, attempting to bring Mossy Bottom farm back to Year Zero with a series of antics designed to undermine the central authority. It falls to long-suffering canine apparatchik Blitzer to impose order on the sheep’s gleeful mayhem, while the farmer, corrupted by capitalist hegemony and dreams of a new tractor, fritters his labour on opportunistic schemes designed to capitalise on recent extraterrestrial activity. A chilling reminder that landowners are an inherently corrupt class. This teetering social structure is further undermined by the appearance of Lu-La, an adorable alien and future Aardman backpack,who shares Shaun’s appetite for chaos. Full review TB

A translator at GCHQ who leaked documents exposing illegal US spying in the run-up to the Iraq War, Katherine Gun (Knightley) eventually owned up to her offense and was tried at the Old Bailey. Hood’s study of her fascinating story does not stint on the info. Lucid explanations of complex shenanigans abound. But Official Secrets is very much at home to melodramatic shorthand. The journalists at the Observer are, in particular, straight from chewed-pencil cliche central. Full review DC

Pamela (Gallagher) believes that she is unable to have more children until, after a boozy encounter with a younger man, her body informs her otherwise. Her teenage daughter (Pettigrew) is embarrassed. The baby’s father is useless. Pamela settles in for a traumatic nine months. Tess McGowan wrote the screenplay while pregnant and the dialogue throbs with an authenticity that never gets in the way of the light comedy. Gallagher is a star. Derry weaves its angular charms. An unexpected delight. Full review DC

Brutal, focused tale of a man going homicidally insane that also happens to be an origin story for Batman’s most notorious villain. Phoenix, whose title character kicks everything else into distant wings, spares no effort in keeping us diverted throughout. Wipe off the make-up and you will, however, find nothing but more make-up beneath. The upcoming Shaun the Sheep film works harder at arguing its sociological thesis. Maybe that shouldn’t matter. Beautifully made and impressively propulsive, Joker is one impressive hunk of nihilism. Full review DC

Other ★★★★★  and ★★★★☆  films out and about: Ad Astra, Bait, Dora and the Lost City of Gold, The Farewell, Hustlers, Love Lives, Once Upon a Time in . . . Hollywood, Pain and Glory, Ready or Not. All current synopses here