Abominable: A decent, gag-filled adventure for the kids 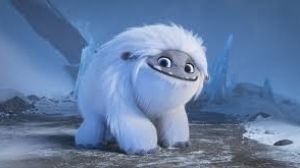 The adorable monster in Abominable

Teenager Yi (Chloe Bennet) is grieving for her late father and feeling distant from her mother and live-in grandmother when she encounters a Yeti on the roof of her apartment block in Shanghai. She and her neglected younger pal Jin (Tenzing Norgay Trainor) and the older, conceited Peng (Albert Tsai) name the adorable monster “Everest” and embark on an epic, cross-country quest to reunite the creature with his family at the highest point on Earth.

The chums have to stay one step ahead of a billionaire trophy hunter (Eddie Izzard) and his tracker – zoologist Dr Zara (Sarah Paulson). Everest, however, turns out to be even more magic than they could have imagined. Bonding, adventure, and violin solos ensue.

It’s tough being the third Yeti-themed animation in 12 months, especially when the competition includes Laika’s splendid (and criminally overlooked) Missing Link. Working with the design team behind How to Train Your Dragon, writer-director Jill Culton, part of the original Pixar staff and the designer of Jessie the cowgirl, has enough expertise to muster some screen magic.

There is little by way of narrative surprises or plot twists in Abominable. It is, rather, a straight-up quest with goofy gags, fun whooping snakes, and giant busting blueberries aimed squarely at younger demographics. A kaleidoscope of colours, it’s the most sensorial family entertainment since Ava DuVernay’s similarly textured A Wrinkle in Time.

The film truly shines, however, as a travelogue which makes the magical best of its Chinese landmarks, including the Gobi Desert, Huangshan, and the Leshan Giant Buddha. This may have been incorporated with an eye on the crucial Chinese market, but the lush visuals make for a pleasing tourist guide for those from elsewhere.

Dancing with the Stars: Glenda Gilson sinks like Titanic
7

Bringing artists back to the island of Inishlacken
9