Land Without God: A trip into the dark side of our Irish State 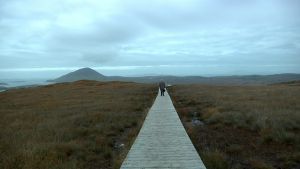 Aged 10 the callow Mannix was sentenced to 18 months in the subsequently notorious St Joseph’s Industrial School in Letterfrack.

Artist and politician Mannix Flynn meets with generations of his family who recount, sadly and starkly, their harrowing childhood experiences in religious-run homes and industrial schools, institutions where sexual and physical abuses were common.

Some members of the family have previously given evidence to various State-backed inquiries, but some are speaking about the abuses they suffered for the first time. The extent of those abuses, as visited upon one family, is difficult to comprehend.

The family’s lowly socio-economic status was a huge factor in their victimisation by church and State. Flynn’s mother was an orphan at 13 who brought up her own siblings; his father swept the streets. Aged 10, the young Mannix was incarcerated for stealing a dinky car. He was sentenced to 18 months in St Joseph’s Industrial School in Letterfrack – a place made notorious by the findings of the Ryan report – hundreds of miles away from his family. Thus began a hellish cycle of abuse and self-destruction. He was forced to work the land, half starved, from dawn until dusk. He was later incarcerated in Marlborough House Detention Centre and St Patrick’s Institution. Aged 15, he was sentenced to five years and sent to Mountjoy Prison.

Flynn inducing and horrific, this is not an easy film to watch. The score (by Laura Naukkarinen) and Lotte Petronella’s camerawork and editing is sombre and characterised by landscapes that dwarf Flynn and abandoned and distressed interiors. It’s a vital and chronicle, nonetheless, one that beats a furious path to escape the weight of generations of trauma and systemic abuse.