Review: Hood’s study of Katharine Gun is an efficient, diverting exercise that will educate 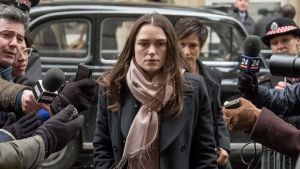 It’s the season of the whistleblower. In a few weeks domestic audiences will get to see Adam Driver as Daniel J Jones, the senate staffer who uncovered evidence of CIA torture, in Scott Z Burns’s forbiddingly austere The Report.

Gavin Hood’s study of brave Katharine Gun is a more conventional piece of storytelling. A translator at Britain’s Government Communications Headquarters who leaked documents exposing illegal US spying in the run-up to the Iraq War, Ms Gun eventually owned up to her offence and was tried at the Old Bailey.

Hood, who cowrote the screenplay with Gregory and Sara Bernstein, does not scrimp on the facts. Anybody wishing to learn how the story played out will enjoy lucid explanations of complex shenanigans. But unlike The Report, the picture is very much at home to cliché and melodramatic shorthand.

Looking only marginally less primped than usual, Keira Knightley convinces as a woman who – not hugely political – gets nudged into action when she encounters a memo from the US National Security Agency seeking help in bugging the UN before a crucial vote on the war. She passes the information on to Yvonne Ridley, at the time a controversial journalist, who puts it the way of the Observer. Despite that paper’s (still surprising) pro-war editorial line, they use it to expose the state’s slippery tactics. As tension mounts, Gun’s marriage to a Kurdish Turk is used against her.

The depiction of the Observer’s newsroom could hardly be broader if it were enacted by the Muppets. Conleth Hill gets to growl “f**ing good story!” as editor Roger Alton. Matt Smith looks very serious as Martin Bright. Not even Gonzo the Great could deliver a more outrageously scruffy, rough-hewn hack – it’s the still-busy Ed Vulliamy – than Rhys Ifans manages here. Some journalists may roll eyes. All will wince at an excruciating turn that saw the clumsy use of a spelling checker wipe out the story’s credibility.

There are meetings in underground car parks and dubious conversations under flickering streetlights. Shami Chakrabarti (Indira Varma) feels it necessary to explain what became of the Belgrano to senior lawyers who really would know such things. And so on.

None of the clunkiness seriously hampers the momentum of a fascinating tale that came to a (no spoilers) still-bewildering conclusion. An efficient, diverting exercise that will educate.

New crime fiction: Shot in the arm for the hackneyed serial killer yarn
2

John Boyne: We formed a strong friendship, it developed into an unhealthy situation
7

‘Short skirts and strong boots’: The pioneering feminism of Anna Parnell
10 An Irishman at a beheading
Real news has value SUBSCRIBE