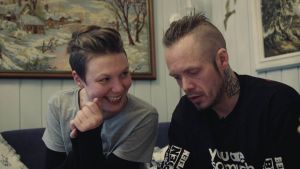 Film Title: The Painter and the Thief

On April 20th, 2015, two oil paintings were stolen from Oslo’s Galleri Nobel. The outsized, photo-realistic pieces were valued at €20,000 but, for Barbora Kysilkova, the struggling Czech artist who painted them, the theft represented an incalculable loss. The culprits were swiftly apprehended and in the courtroom one of them – a junkie named Karl Bertil-Nordland – said he stole the works in question “because they were beautiful”.

Perhaps this remark flattered the artist, or perhaps it was her way of taking control of the narrative. But Kysilkova, feeling “a sort of obligation to continue the story”, asks to meet the perpetrator. And then she asks if she can paint him.

The Painter and the Thief - official trailer

Although covered in written warnings (one prison tattoo reads “snitches are a dying breed”), Bertil-Nordland has a softer side. Abandoned by his mother and raised by an absent father, the former farm boy fell in with a “bad crowd” of which he is one of two survivors. While recovering from an injury, he gets in decent physical and mental shape. Kysilkova suddenly seems more lost than her subject.

Working with editor Robert Stengard, the filmmaker finds a third act reveal of sorts. Commendably, the film has no glib or neat conclusions. It remains as messy and human as those who inhabit it.

Still, one can’t help but puzzle over some of the “big scenes”. The moment when Bertil-Nordland sobs as Kysilkova unveils his painting feels awfully contrived. During this and other allegedly intimate exchanges, neither acknowledge the presence of DOPs Ree and Kristoffer Kumar. It’s also impossible to buy the thief’s repeated insistence – against Barbora’s many inquiries – that he cannot recall what he did with the paintings he expertly and swiftly removed from their frames.

Perhaps there’s more than one artistic trick at the heart of this intriguing doc.

Daniel O’Connell, the greatest of all politicians
10