‘Rosie’ may be an ‘issue film’, but it is charged with raw emotion 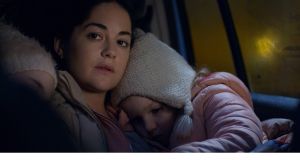 In ‘Rosie’, Sarah Greene (above) and Moe Dunford play a couple who find themselves without accommodation.

Paddy Breathnach’s Rosie, a searing film tackling the nation’s homelessness crisis, has had its world premiere at the Toronto International Film Festival. Roddy Doyle, who wrote the screenplay, joined Sarah Greene and Moe Dunford, the film’s stars, at the screening on Friday night.

Greene and Dunford play a couple who find themselves without accommodation when their landlord decides to sell their family home. The film follows the family, two adults and three children, as they seek to find a hotel that will take them for one more night.

Rigorously researched, Doyle’s screenplay makes an insistent refrain of the information the title character is forced to repeat. Does the hotel have a room? Yes, it is on the corporation credit card. Her mobile phone is constantly glued into her hand. You sense Greene straining to remain polite despite the enormous pressure building up around her.

“They have a child that’s just started secondary school. What’s that like?” Doyle told The Irish Times. “It’s not about filling the day; it’s about packing everything in. There is constant anxiety. You have everything in plastic bags. What’s the problem with those? They burst.”

Doyle was adamant that the characters should be part of an “ordinary family”. The husband is in work. They have a car. This subtly moving piece argues that it requires no great catastrophe for everyday citizens to be cast into the void that engulfs Rosie and her husband. It may be very much an “issue film”, but it is charged with raw emotion and a feeling for the coping mechanisms families employ when in Extremis.

Rosie is one of six Irish films supported by Screen Ireland (formerly The Irish Film Board) to show at this year’s festival. John Butler’s Papi Chulo, the director’s follow-up to Handsome Devil, will have its world premiere this weekend. Neil Jordan’s Greta, a thriller starring Isabelle Huppert, screened in the opening days to positive (if somewhat baffled) reviews. “The resulting craziness is quite delightful to behold in the moment and to reflect on after,” The Hollywood Reporter commented.

The Toronto International Film Festival, which began on Thursday, launches the beginning of a yawning awards season that stretches all the way to the Oscar ceremony in February. Among the films vying for the attention of Academy voters are Bradley Cooper’s A Star is Born, a remake of that classic starring Lady Gaga, Alfonso Cuaron’s Roma, a monochrome saga of Mexican family life, and Steve McQueen’s crime drama Widows. Liam Neeson and Colin Farrell are among the starry cast fleshing out McQueen’s variation on an acclaimed Lynda La Plante TV series.

The festival ends on Sunday September, 16th with the awarding of the People’s Choice award.