Desiree Akhavan: ‘It’s very hard to come out as bisexual’ 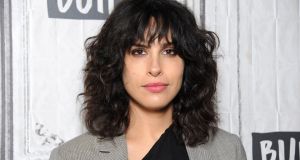 Desiree Akhavan: “I don’t have an agenda – I just have stories I want to tell.” Photograph: Desiree Navarro/WireImage

Forget the World Cup. Forget Harry and Meghan’s bash. Forget the insane extremes in weather that will ultimately probably kill us all. Twenty-eighteen is all about Desiree Akhavan.

Earlier this year, the brilliant Iranian-American queer writer-director-star of 2014 cult favourite Appropriate Behaviour rightly scored a Sundance Grand Jury Prize winner with The Miseducation of Cameron Post. The film, an adaptation of the novel of the same name by Emily M Danforth, stars Chloë Grace Moretz as the titular heroine, a teenage girl growing up in Montana in 1993, who is discovered making out with a girlfriend on prom night and is promptly sent to God’s Promise, an Evangelical conversion therapy camp.

There, she and other teenagers are forced to “pray the gay away”. At least in theory. In practice, despite the best efforts of steely “Doctor” Marsh (a terrifying Jennifer Ehle) and her well-meaning associate Reverend Rick (John Gallagher Jr), a triumvirate of tearaway teens (Moretz, Forrest Goodluck and Sasha Lane) grow and smoke weed and show no signs of “rehabilitation”.

For Akhavan, the film was a way of wrestling “queer female stories back from male film-makers”, but that wasn’t her primary motivation as writer and director.

“I don’t have an agenda,” she insists. “I just have stories I want to tell. I read the book and I loved it. It felt like the perfect metaphor for being a teenager, no matter who you are. Even if you’re not gay, there’s a realisation that the adults in your life don’t have any real authority. That they don’t determine your life. Every teen has to realise that if they are coming from a home that is not supportive. And then we had those three young actors who are very intelligent, very different, and who brought that to the screen.”

Akhavan is merely clearing her throat with the marvellous Miseducation of Cameron Post. The Bisexual, her London-based sitcom, will debut later this year on Channel 4 and is already being compared to groundbreaking label-mates Cucumber and Queer as Folk. “An honest look at the last taboo, bisexuality, and what it means to refuse to compromise on what you want,” runs the pitch for a series that features Maxine Peake and Irish dynasty sibling Brian Gleeson.

“It’s a series about a lesbian who comes out as bisexual in her 30s,” says Akhavan. “So she leaves her long-time partner and starts to date men for the first time in her life. She moves in with Brian and they become each other’s wingmen. She helps him understand women. And he helps her understand men. It’s sort of a buddy comedy.”

The show reflects, although doesn’t approximate, Akhavan’s own experiences when coming out as bisexual to her family. “A lesbian dating men is probably the worst thing they can do,” she says. “It was tricky and complicated for my family. I think they felt, well, you have an option, so why would you choose to make our lives more difficult? It’s very hard to come out as gay. And it’s very hard to come out as bisexual.”

Today, Akhavan is in London, where she moved to be closer to her writing and producing partner, Cecilia Frugiuele. She retains the air of a native New Yorker, having been born there to parents who had fled the Iranian revolution. While attending an independent and well-regarded prep school in the Bronx, she was relentlessly bullied and went on to develop an eating disorder. London, she says, is a source of relief.

I didn’t even want to make films until I was 20. I loved theatre growing up. I always thought I wanted to be a playwright

Against that impulse, she always loved performing, and began writing and staging material for her parents and brother from the age of 10.

“It doesn’t make any sense, does it?” she says. “It definitely defies logic. That I do what I do despite all the negative reinforcement. It’s weird. I didn’t even want to make films until I was 20. I loved theatre growing up. I always thought I wanted to be a playwright. I watched a lot of TV and movies but I didn’t go to anything that was very highbrow. I would watch The Tracey Ullman Show or Two and A Half Men or Mel Brooks movies with my dad. I watched The Brady Bunch constantly. Whatever made us laugh. It wasn’t until I got to film school and took a world cinema class that I suddenly got really into the French New Wave and Godard and Truffaut. Until then, it had just been a lot of shitty television.”

She made a small splash with her web series The Slope, which explored “homophobic, superficial lesbians” in Park Slope, Brooklyn, and a bigger splash with her hilarious 2014 feature debut, Appropriate Behaviour, an excruciating “personal, not autobiographical” comedy starring Akhavan as an Iranian-American bisexual. That film brought her to the attention of Lena Dunham, who soon cast Akhavan in Girls.

“I definitely think it’s important to explore female sexuality,” says Akhavan. “I can’t say that I have a manifesto. I’m interested in sexuality and taboos only because I follow where my interests take me.”

The timing of The Miseducation of Cameron Post and The Bisexual may look like an overnight success, but the hyphenate talent has experienced a tricky few years between projects.

“I’ve found it very hard to get my movies made,” says Akhavan. “I found it hard to get people to take a risk on them. It’s a very male-dominated industry. It’s a boys’ club. And the opportunities simply aren’t there for women. But I will say I think the desire is there for that to change. And even if that is only for the very superficial reason that it’s good PR, that’s a good thing for everybody.”