Our movie critics rate Zappa, I Care a Lot, To Olivia, and Hellraiser: Judgment 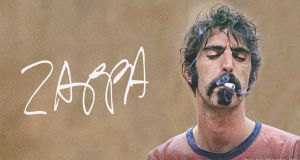 Poster art for the documentary Zappa

ZAPPA ★★★★☆
Directed by Alex Winter. Featuring Frank Zappa, Gail Zappa, Alice Cooper, Ian Underwood, Ruth Underwood. VOD, 129 min
Can Winter’s comprehensive documentary on Frank Zappa have any appeal for the thousands turned off by that musician’s puerile lyrics and endless bloody-mindedness? This sceptic says yes. Winter remains a fan and, over a lengthy running time, he makes an effective case for his questionable idol as a distorting mirror on the US condition from the 1950s to Zappa’s early death in 1993. Offered access to enormous personal archives, the director has no shortage of impressive visuals to arrange around the guitar solos, satirical ditties and large-scale orchestral compositions. Not just for enthusiasts. DC

Pike plays a shady woman who makes her living by persuading courts to appoint her as legal guardian to wealthy elders. There are no good people in I Care a Lot. But some bad people turn out to be worse than others. The final act descends into chaotic silliness, but watching Dinklage and Pike attempting to out-villain one another is never dull. Deborah Newhall’s costumes would look intimidatingly power-hungry on a clothes hanger, let alone Ms Pike. And there’s a terrifying subject lurking under the dark humour. TB

Baggage hangs around this treatment of Roald Dahl and Patricia Neal’s emotional recovery after the death of their daughter in 1962. Dirk Bogarde and Glenda Jackson already essayed the roles in an excellent TV movie. Following revelations about anti-Semitism, Dahl is now a somewhat “problematic” figure. But the film just gets by on committed performances and dusty rural ambience. Bonneville’s warmth softens a famously awkward character. Hawes is convincing as one of the great American actresses. And Geoffrey Palmer gives a wonderful final performance as the Archbishop of Canterbury. DC

As Jean-Paul Sartre almost had it: hell is another Hellraiser movie. This half-hearted, cheap-as-chips police procedural concerning three detectives and their investigation of a serial killer known as the Preceptor, whose murders are based on the Ten Commandments. This awful enterprise gets a solitary star – it’s a stretch – on account of its unexpectedly decent final shot and a cameo from Heather Langenkamp, the original Final Girl from The Nightmare on Elm Street series. One for Hellraiser completists only. Assuming there are any left. TB