Gone Girl review: Nobody is escaping this marriage unscathed 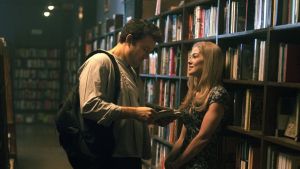 Opinion is divided as to what David Fincher should be doing with himself. His supporters believe an enormous talent is being wasted on adaptations of airport novels such as Stieg Larsson’s The Girl with the Dragon Tattoo and, now, Gillian Flynn’s Gone Girl. Really? Surely, any brief consideration of Fincher’s big, serious works – the numbingly boring Benjamin Button and the painfully adolescent Fight Club spring to mind – will confirm that he is better off imposing his shadowy style on high-end pulp.

The turgidity of the source material ultimately dragged Dragon Tattoo into the slush. Nobody should wonder that the sequel has yet to surface. But Gone Girl proves a near-perfect match for the director’s obsessively compulsive intellectual vacuity.

Beginning with investigations into the disappearance of a mid-western ice queen, the film swivels towards complete absurdity in its second half. In the hands of a more hysterical director, the rampaging melodrama might prove utterly indigestible. But repeated application of the Fincher Method – insidious, minimal score by Trent Reznor and Atticus Ross; smoky, low- contrast photography from Jeff Cronenweth; unhurried editing by Kirk Baxter – flattens out the peaks and the troughs to allow steady progress towards a satisfactorily grim ending. No such ministrations can cure the film of its profoundly puzzling misogyny, but maybe Flynn and Fincher are, in this area, actively trying to creep out their audience. If so, they succeed.

Fincher has always been skilled at casting. Ben Affleck, an actor about whom many are equivocal, makes perfect sense as a man demonised by hungry media. Rosamund Pike is a revelation as the wife with whom he has a slow, painful falling out. We’ve seen Pike’s haughtiness before, but Gone Girl allows her to get at a hitherto underexploited savagery. Nobody is escaping this marriage without losing at least a limb.

The picture begins with Nick Dunne (Affleck), a failed writer now living in his home state of Missouri, discovering his wife, Amy (Pike), missing after an apparent struggle in the living room. We then flash back to follow the couple’s journey from idyllic meetings in New York to financial difficulties to tensions in bland mid-western suburbia. As suspicions gather around Nick, the picture paints a portrait of emotional divergence. The cute “in jokes” that couples devise early on in relationships eventually become forced reminders of their growing incompatibility. While a decent cop (the excellent Kim Dickens) tries to play by the rules, gutter journalists begin constructing a gallows for our flawed protagonist.

That narrative lurch at the halfway point has been telegraphed repeatedly in the opening act. Indeed, the story has fewer stunning reversals than it has modestly arresting sharp swerves. Nonetheless, the deranged denouement will cause some fanning of armpits and much mopping of brows.

The film’s barmy sexual politics may trigger more extreme reactions still. One could argue that, had a woman not written Gone Girl, it would never have been allowed to emerge in its current state. Poor Nick gets on well with his sister (a little too well, the tabloids suggest) and he is lucky in his investigating officer. Elsewhere, entire shoals of vaginae dentata gather to pick the flesh from his weary bones. Female neighbours stare savagely. Two woman journalists are thirsty for his blood. We learn early on (fret not, spoiler police) that Amy has it in for him.

Eventually, harried and exhausted, he exclaims: “I am so sick of being picked on by these women.” Tyler Durden in Fight Club seems like Andrea Dworkin by comparison. There is, however, no suggestion that we are seeing Nick’s distorted version of a less threatening reality. The women really are as frightful as he suggests.

Maybe Flynn and Fincher are trying to stir up the sort of debate that swam around screenings of Fatal Attraction. This is a dangerous sort of game. Approach with caution (but do approach).