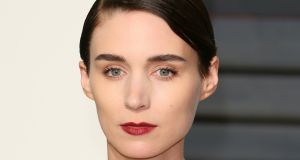 By her own admission, Rooney Mara has always been a rather serious young woman. As a youngster, between devouring the works of the Brontë sisters, she once dressed up as Clara from Johanna Spyri’s Heidi for Halloween. She founded the Ugandan-based charity Faces of Kibera while she was still studying at New York University (where she read international social policy and nonprofits). In 2011, having been cast in David Fincher’s The Girl with the Dragon Tattoo, another actor might have squealed with delight. Instead, she visibly squirmed throughout the swish Stockholm press conference and later told me: “The world is gloomy. All you have to do is turn on the news.”

Even by Mara’s weightily minded standards, Una, a new screen adaptation of David Harrower’s controversial play Blackbird, is some heavy-duty stuff. The film, as adapted by Harrower, unfolds as a confrontation between the damaged young woman of the title (Mara) and Ray (Ben Mendelsohn), the neighbour and family friend who sexually abused her when she was 13.

“I was really very passionate about it for a long time,” says Mara. “I wanted to do Blackbird since I first saw the play in 2007. And then when I was making Carol, me and Cate [Blanchett] were talking about theatre and I told her that this was the play I really wanted to do. And she said: ‘Oh my God: my friend is making that into a film.’ It turned out Cate has worked with Una’s director Benedict [Andrews] many times and she said that he was desperate to meet me for the role.”

Andrews, the Australian director who made a huge splash when he reimagined Caligula on football terraces for the English National Opera in 2012, is currently a hot ticket in London’s theatreland, having scored hits with his spinning production of Tennessee Williams’s A Streetcar Named Desire, starring Gillian Anderson, and with a spatially daring Cat on a Hot Tin Roof, featuring Sienna Miller and Jack O’Connell.

“[Rooney] is an intensely focused, deeply collaborative actor,” says Andrews. “She loved the play Blackbird and was fully prepared to put herself on the line to bring it truthfully to the screen. Her performance is visceral, unsettling, and raw. She draws us into Una’s mystery, her secrets and her hurt. She’s simply one of her generation’s most fearless and committed actors.”

That fearlessness translates into a great deal of viewer discomfort while watching Una. Indeed, one yearns for the comparatively easy paedophile revenge cycle of Hard Candy or To Catch a Predator, or for the subversive victimhood of Paul Verhoeven’s Elle, but Andrews’s film stubbornly refuses to play ball. Most disconcertingly, Una remains convinced that she and Ray were in love, despite copious evidence to the contrary.

“That was one of the things that was very challenging about it,” says Mara. “She doesn’t really know what she’s doing when she tracks him down. She doesn’t know what she wants to get out of it. It’s unfolding moment to moment, and that was really exciting to me. I think everybody will have a different opinion of whether he is telling the truth, and I think that’s part of what makes it great.”

Reviews have variously described Una as a “morally ambiguous paedophile drama” (South China Morning Post), “the one film you can’t miss in 2017” (Bustle), and “compellingly toxic” (The Guardian). The words “unsettling” and “disturbing” have been bandied around quite a bit.

What actor wouldn’t want that, asks Mara. “Those are the things we should be going after,” she says. “All of those things sound great to me. I don’t know why you’d be running from that. Unsettling and disturbing and unpredictable are all the things that drew me in.”

She has always been a singular creature. She may be the great-granddaughter of the founder of the Pittsburgh Steelers on one side, and the founder of the New York Giants on the other (the Steelers is still family-owned; her dad and his 10 siblings share a 50 per cent stake of the Giants) but she never cared for the sport “beyond being taken to the games”. She took a career break right after Dragon Tattoo, when few actors would have dared, and another on the back of a series of critical wows in 2013 (including Spike Jonze’s Her, Steven Soderbergh’s Side Effects, and David Lowery’s Ain’t Them Bodies Saints).

And, most curious of all, when her grief-stricken widow scoffs an entire pie in David Lowery’s A Ghost Story, it was the first time she had eaten such a thing. How does one live for 32 years without ever eating pie?

“It’s definitely true in my mind,” Mara insists. “My mom was like: you’ve definitely eaten pie. But no. I really haven’t. I was a very picky eater growing up. There were only like five things that I would eat. And desserts were a problem. When people brought cupcakes into school on their birthday I didn’t like the icing. I never liked sweet things. So I never had pie. And David was really insistent that she was going to eat a pie. I wanted it to be something else. But you know what? The pie was very delicious.”

For Mara, the third of four children from an extended Irish-American family, picky eating required a considerable effort: “There’s one meal made for everyone and if you’re not going to eat it, you’re going to have to sit in front of it. There were lots of times I ended up sitting and staring at meatloaf.”

“I’ve always been a very intense person,” she says. “So I’ve always had a very intense stare. I think you can always tell a lot about how I’m feeling just by my body language. That’s not something I think too much about when I’m working. It’s just part of who I am. Anyone can read me. I’m a really terrible liar. I’ve never tried to play poker. But I’m guessing I couldn’t.”

Perhaps. Yet Patricia Rooney Mara, as it says on her birth certificate, is frequently characterised as secretive and impenetrable by interviewers. She is “guarded”, by her own account, and “self-contained”, according to such chums as Cate Blanchett. Today’s encounter only happens after multiple doomy warnings to “stick to the movie” from various intermediaries.

Now, though, Mara seems more at ease around enquiring strangers than she did during own first meeting in 2011. She talks freely about the joy of her multiple collaborations with David Lowery, Casey Affleck and Joaquin Phoenix. She and Phoenix arrived as a couple at the Cannes Film Festival last May, and will soon play Mary Magdalene and Jesus, respectively, in Garth Davis’s incoming biblical drama.

“It’s not so strange. Most people work together in the same office for years, and when you find people you connect with and have a shorthand with . . .” She laughs: “It helps when they are vegan.”

She’s hoping to come back to Ireland soon, as the tight shoot for Jim Sheridan’s The Secret Scripture didn’t allow any additional time to visit her maternal ancestral home in Co Down. “I felt completely at home in Ireland,” she says. “Except that doing the Irish accent was hard. It’s a hard accent to master and one that – even I can hear – often ends up being done horribly. Doing it was terrifying. Especially being on set with real Irish people.”

Una is available on limited release and VOD

Rooney Mara on the Girl with the Dragon Tattoo reboot

Last March, some six years after David Fincher’s $232.6 million-grossing film adaptation of The Girl with the Dragon Tattoo, Sony announced that the Lisbeth Salander series will be rebooted. But without Rooney Mara. Or Daniel Craig. Or David Fincher.

Back in 2010, Fincher allegedly had to fight to cast Mara in the role, due to her relative obscurity. But now she’s an Oscar nominee and a Cannes winner. What gives? Has anyone tapped her up for Fede Álvarez’s incoming The Girl in the Spider’s Web? “No,” she says. “No one contacted me or talked to me about it at all. I know they are doing something. But I’m not involved. If something similar came along I would be open to doing a franchise. I would have loved to have done the other Dragon Tattoo books. But it just didn’t work out that way.”