He’s the first actor in the series who is ‘bigger than Bond’. They were desperate to keep him

After months of teasing, Daniel Craig confirmed in an interview on the Stephen Colbert Show that he will be returning to the tux. Video: The Late Show with Stephen Colbert 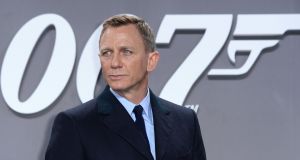 Daniel Craig: The other Bonds just wore the suit. This one was scarily real. Photograph: Britta Pedersen

For decades the James Bond series has been the Rolls Royce of British cinema: deluxe film-making that maintains a reputation for excellence, while simultaneously acting as a classy-but-discreet national-esteem enhancer.

From its early-60s inception it has been a solid box-office presence and a middlebrow tastemaker – but no one could ever accuse the Bond films of reinventing the wheel.

That changed dramatically with the release of Skyfall – aka Bond 23 – which became the highest grossing film in the UK (until the release of Star Wars: The Force Awakens) and the second biggest British film ever worldwide (behind Harry Potter and the Deathly Hallows Part 2).

With its giant box office take, Bond morphed from a Rolls into a supercar: a Ferrari, or a Lamborghini.

This, in simple terms, explains the desperation of Bond producers Eon to retain the services of Daniel Craig, given that Bond’s evolution happened on his watch. Shoring up the value of their product depended a great deal on keeping the key personnel on board, and they only have to look at the likes of Doctor Who – another venerable British franchise – to see the traumas that can accompany the regeneration of a leading actor.

With director Sam Mendes having dropped out – after delivering the goods a second time with the almost-but-not-quite-as-huge Spectre – making sure Craig didn’t do the same became a priority. In the face of Craig’s continued reluctance to remain, the rumoured sums of money are eye watering: a fee of nearly £50 million (€55 million) for Spectre, and almost £120m (€132 million) for this new film and – possibly – another one.

Craig’s overt resentment at the prospect of continuing the role may have merely been a bargaining chip, but it’s likely something more.

Part of the “traditional” Bond ethos was to use workmanlike directors and unthreatening actors – they posed little challenge to the producers and, much as we loved Roger, Sean and Pierce in the role, there was no sense they were bigger than Bond.

By hiring Craig for 2006’s Casino Royale, however, Eon were taking on a heavyweight performing presence: he might have the square jaw, piercing eyes and moulded pecs, but he could also play Ted Hughes to Gwyneth Paltrow’s Sylvia Plath, and convincingly inhabit the traumatised college lecturer of Ian McEwan’s Enduring Love.

It was clear from the very first frames of Casino Royale that Craig was going to provide a very different 007 to previous incarnations. Bond’s producers regularly say they are returning to basics, or bringing out a darker edge, but Craig really supplied it: the opening sequence where he batters Darwin Shaw in a toilet was by far the nastiest scene Bond had ever committed to celluloid.

The other guys, it was immediately clear, just wore the suit; this one was scarily real.

It’s not surprising that Craig found the role constricting, and not only because of typecasting. Inside the industry 007 has attracted most admiration for its ability to generate huge amounts of income through weapons-grade marketing and corporate relations: not simply product placement, but a whole universe of cross-promotional TV spots and publicity shoots, in which the Bond brand has been used to endorse multiple product lines.

(It’s hard to remember now, but the biggest story in the run-up to Skyfall was Bond’s switch to Heineken, from vodka martini, in return for $45m.)

Doing Bond committed Craig to a plethora of TV commercials, fashion shoots, and commercial campaigns; amply rewarded work that’s no doubt burdensome all the same. The series’ most auteurish directors – Mendes, Martin Campbell – have not stuck around for more than two films, so to expect a performer of Craig’s stature to endlessly return is perhaps a little unreasonable.

Moreover, Craig has not exactly been helped by any monumental improvement in the backroom work. Bond still represents unadventurous large-scale film making that – despite much effort being front-loaded into opening-sequence action scenes (a newish Bond tradition that goes back to the first Brosnan film, Goldeneye) – has not solved the series’ big weakness: lengthy, laborious narratives that have to explain every single nuance with frowning concentration, as well as shoehorning in extended chase-and-kill sequences.

The non-plussed audience reaction to attempts to emulate a Marvel type “universe” in Spectre was telling; hopefully they’ll be abandoned. Bond is all about Bond, and already exists in a clearly defined soft-focus universe of British imperial decline.

But recent political events may well have given Bond – and Craig himself – a new project: can 007 slay the spectre of Brexit? If any cultural phenomenon summed up the mind-state of your fervent Leaver, Bond – with his sharp-suited white-man privilege, bred-in-the-bone patriotism, and British-chap derring-do – is surely it.

Will Craig distance 007 from the flag-waving, Union-jack parachute version? Or will the series sail serenely on, like the QE2 into the Atlantic sunset?

Whichever way it goes, Craig’s swansong could be the most interesting Bond yet.

The movie quiz: What film recently took home the most Golden Globes?
3

The Great British Bake Off: The contenders to become the new host
6