Spike Lee, who stormed out of the Oscars after "Green Book" won Best Picture at Sunday's Oscars, likened the news to a bad call at a Knicks basketball game at Madison Square Garden. 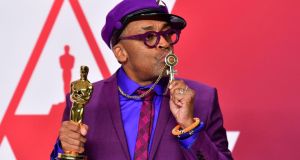 Spike Lee: the director, who won a best-adapted screenplay Oscar, tried to storm out of the Dolby Theatre after Green Book was announced best-picture winner. Photograph: Frederic J Brown/AFP/Getty

The director Spike Lee, whose film BlacKkKlansman was nominated for this year’s best-picture Oscar, said “the ref made a bad call” when the competing racial drama Green Book won the top prize at Sunday’s Academy Awards.

Lee tried to storm out of the Dolby Theatre in Hollywood just after Green Book was announced the winner at the end of the Oscar show, according to various media accounts, then came back to his seat, where he turned his back on the stage during Green Book acceptance speeches.

Green Book, based on a true story of the unlikely friendship between a black pianist and his white driver touring the racially segregated southern United States during the 1960s, also won for best original screenplay and supporting actor, Mahershala Ali.

In the press room backstage, Lee recalled that a previous racial drama of his, Do the Right Thing, had failed to earn a best-picture nomination for the Oscars in 1989, the year the film Driving Miss Daisy – about a black chauffeur for a white elderly southern woman – won the award.

Can’t stop looking at the group of people collecting the Best Picture Oscar for Green Book, a film about racism in the South. pic.twitter.com/4NBNit588I

How sly of the Academy to have Civil Rights icon John Lewis present a clip from GREEN BOOK. The perfect kind of damage control aimed at the inevitable backlash that was to come with its Best Picture win. #Oscars2019

“I’m snakebit. Every time someone is driving somebody, I lose,” Lee told reporters in response to a question about his reaction to the win for Green Book.

The director, a big fan of the National Basketball Association’s New York Knicks, said that when he heard Green Book announced as the year’s best-picture winner, “I thought I was courtside at the [Madison Square] Garden, and the ref made a bad call.”

Lee won an Oscar on Sunday for best adapted screenplay as a writer for BlacKkKlansman. Other writers from the film declined to address Lee’s reaction to the outcome of the best-picture contest. “We’re just glad to be here, glad we won,” said one of them, Kevin Willmott. “It’s a real breakthrough that any film about race gets to win.”

Some critics faulted Green Book for portraying a white character, in this film played by Viggo Mortensen, as the main protagonist in a film about discrimination against black people.

The film also sparked controversy months ago when relatives of the pianist at the centre of the story, Don Shirley, complained his depiction in the movie contained inaccuracies. Ali, who played Shirley in the film, has said he respects the family and had spoken with them.

In addition, accusations of sexual impropriety by the director Peter Farrelly from the 1990s resurfaced after the film’s release. Farrelly has apologised for his conduct.