Oscars 2019: Olivia Colman and Green Book triumph in a night of shocks 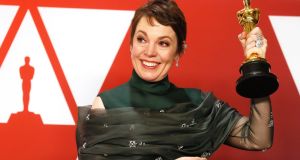 Olivia Colman holds her award for Actress in a Leading Role for ‘The Favourite’ during the 91st annual Academy Awards. Photograph: EPA/ETIENNE LAURENT

Olivia Colman pulled off the biggest of several shocks at the 2019 Oscars when she won best actress for the Irish production The Favourite.

Bohemian Rhapsody, the story of Freddie Mercury and Queen, overcame indifferent reviews and a troubled production to win four awards. On an evening where the love was spread, no other film won so many.

Colman’s typically unpretentious speech triggered a standing ovation. “My kids are at home and watching. Look! If you’re not, well done. But I sort of hope you are. This is not going to happen again. To any little girl who is practising her speech on the telly – you never know,” the English actor said before blowing a raspberry at the person asking her to wrap up.

Alfonso Cuarón’s Roma, a tale of life in 1970s Mexico City, was a strong favourite for best picture, but it had to settle for best director, cinematography and foreign language film. The Academy has yet to award its top prize to a film in any language other than English.

It was an odd night for The Favourite. The Element Pictures production had secured 10 nominations – with Roma, jointly the most – and was expected to triumph in best original screenplay and costume design. The less likely best actress proved to be its only win.

Robbie Ryan, the respected Irish cinematographer of The Favourite, lost out in that category to Cuarón.

The Mexican became the first director to take the award for shooting his own film.

Rami Malek, acclaimed as Freddie Mercury in the otherwise indifferently received Bohemian Rhapsody, addressed the audience with great dignity after accepting his Academy Award for best actor. “I may not have been the obvious choice, but I guess it worked out,” the Californian said. “Thank you Queen. Thank you for allowing me to be the tiniest part of your enormous legacy. I am forever in your debt.”

None of the winners for that film made mention of Bryan Singer, the film’s nominal director, who was fired during production.

Mahershala Ali won a second Oscar for his supporting role as the pianist Don Shirley in Green Book. It is only two years since he took the same prize for Moonlight. He thus joined Denzel Washington as one of only two black actors to win multiple Oscars.

“I want to dedicate this to my grandmother,” he said. “Who has been in my ear my entire life saying: if at first you don’t succeed, try, try again. … I know that I would not be here without her.”

Regina King, another African-American actor, took the best supporting actress prize for her role as a determined mother in Barry Jenkins’s lovely adaptation of James Baldwin’s If Beale Street Could Talk.

“James Baldwin birthed this baby and Barry, you nurtured her, you surrounded her with so much love and support,” King said on the podium.

The event was notable for the diversity of its winners. Ruth E Carter, costume designer of Black Panther, and Hannah Beachler, production designer on the same picture, became the second and third African-American women in Oscar history to win in a category other than acting.

Spike Lee, accepting his first ever competitive Oscar, gave a triumphant speech. Wielding the best adapted screenplay award for BlacKkKlansman, he bellowed: “The 2020 presidential election is around the corner. Let’s all mobilise. Let’s all be on the right side of history. Make the moral choice between love versus hate. Let’s do the right thing!”

The run-in to the 2019 event has been famously chaotic. Various proposed innovations – such as plans for a best popular film Oscar – were shelved following objections from the membership and the ceremony ended up with no host for the first time since 1989.

Thirty years ago, the show began with a famously disastrous musical number. This year, in honour of Bohemian Rhapsody, a version of Queen featuring Adam Lambert in Freddie Mercury’s place kicked things off with a tolerably ersatz We Will Rock You.

Tina Fey, Amy Poehler, and Maya Rudolph then entered to deliver a brief introduction that was more densely packed with jokes than any recent opening monologue. They did a good job of parodying the sort of lame references that we apparently weren’t going to hear.

“There is no host tonight. There won’t be a popular movie category, and Mexico is not paying for the wall,” Rudolph confirmed. There will surely be efforts to have them back next year.

The organisers put together a zippy show untainted by the longeurs that dragged some earlier editions beyond the four-hour mark. Comic highlights included Melissa McCarthy presenting best costume design in a hilarious gown – decorated with busy animatronic rabbits – that paid tribute to Olivia Colman’s robe in The Favourite.

Mike Myers and Dana Carvey, stars of Wayne’s World, turned up to honour that film’s debt to Queen and to Bohemian Rhapsody (the song) in particular. Bradley Cooper and Lady Gaga, stars of A Star Is Born, belted out a magnificent version of Shallow, which won best original song.

All this played out beneath a flouncy stage whose elaborate flourishes suggested a submarine palace in recent smash Aquaman.

The Academy will be delighted to say goodbye to a controversial season. They will be happier still do have done so with a relatively smooth, reasonably amusing show.

Alas, they couldn’t quite get below the promised three hours, but they came close.

Ardal O’Hanlon: ‘I was always this weird, watchful kind of kid’
6