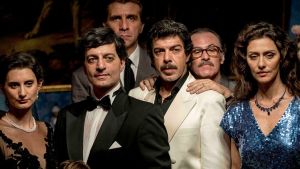 It seems like centuries ago that Marco Bellocchio’s Mafia drama made its modestly buzzy premiere at the 2019 Cannes Film Festival. The movie has become no less of a conundrum on its journey to our smaller screens.

Bellocchio last appeared at Cannes a decade earlier with the impressively busy Vincere, a riotous, noisy, shocking study of the young Mussolini. The prospect of those energies being applied to this true-life yarn – an insider testifies against the mob and experiences various traumas over two decades – is a tantalising one.

The Traitor has all the trappings of an indecently immoral entertainment. Yet it has turned out be oddly flattened. Too much is taken up with uninteresting muttering in the shadows. Secondary characters are insufficiently developed. The lengthy courtroom scenes in the later stages ultimately become suffocating.

The picture tells us how Tommaso Buscetta (Pierfrancesco Favino) went from high-ranking Cosa Nostra operative to the most damaging of snitches. In 1980, the anti-hero (I guess) moves from Sicily to Brazil as drug wars threaten to eat up the competing clans. He finds no peace. The deaths at home keep mounting up and he is arrested by the Brazilian police. He decides to seek immunity and testify against his old colleagues. The welcome is decidedly cool when he returns to Italy.

The performance by Favino is an unqualified success. An enigma riding out on waves of hair-oil, the gangster hides so many of his motivations behind a face apparently carved from the native minerals of Palermo. Favino has enough charisma to animate even such a concealed personality.

One yearns to have a more interesting film around him. The issue is partly one of style. Vladan Radovic’s camera savours the enveloping darkness, but the scenes he shoots are played out at the pace of a scooter with a wonky wheel. A more serious problem is the film’s reluctance to translate its researches into drama.

Buscetta was one of the first prominent Mafia pentitos – informants of elevated status – and the facts behind his turning are worth conveying. But this is not a documentary. Too often we seem to be sitting through transcriptions of hearings or staged readings of contemporaneous newspaper reports. Make a story of it, man.

The picture still holds the eye, but there is something much more gripping bursting to get out.

Available to stream on Curzon Home Video from July 24th