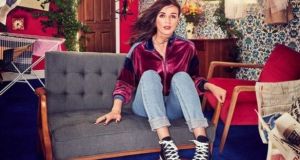 Irish comedian Aisling Bea plays Áine, the protagonist of This Way Up

Ms Bea, from Co Kildare, won the breakthrough talent award for her comedy-drama This Way Up, about a teacher trying to pull her life back together after having a nervous breakdown.

The 36-year-old comedian, actor, and screenwriter said receiving the award is an “absolute dream come true” and dedicated the win to her father Brian who “didn’t get to be any older than I am today and for whom I wrote the show”.

Meanwhile, Mr Harte, from Co Donegal, scooped a prize in the editing: factual category for his work on Netflix’s documentary series Don’t F*** With Cats: Hunting An Internet Killer.

The series chronicles the story of Luke Magnotta, an infamous Canadian murderer who sought internet infamy by posting videos of himself killing kittens prior to the murder of Chinese student Lin Jun in 2012.

In a video message after his win was announced, Mr Harte said it was “such an honour” to win the award, and that it was a “team effort” to put the series together.

He thanked all of his colleagues, family and his “girlfriend Claire who is due with her first child any minute now”

The awards, which celebrate technical achievement, were hosted by actor and comedian Stephen Mangan. He appeared at the start of the digital Bafta ceremony wearing pyjama bottoms and a dinner jacket.

In a recorded message at the start of the broadcast, Bafta chairman Krishnendu Majumdar said the academy is “committed” to addressing diversity issues in the wake of the Black Lives Matter movement.

“Bafta cares passionately about championing the next generation of talent so they have the best chance to succeed,” he added.

In a recorded message, she paid tribute to the “amazing” team who work on the programme and said she would like to share the award with its star Cillian Murphy.