Last and First Men: An extraordinary, engrossing and moving piece of cinema 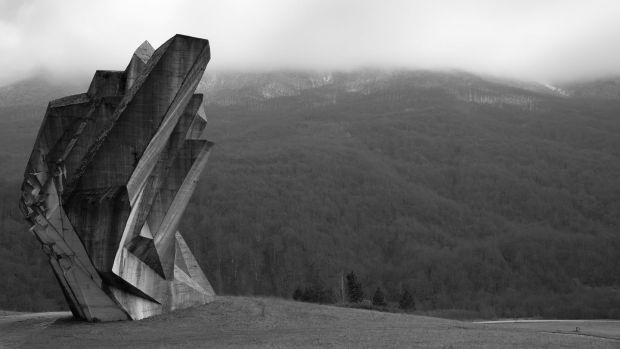 These extraordinary, evocative objects are, in fact, a series of remarkable communist-era World War II memorials in the Balkan Mountains.

The British philosopher and writer Olaf Stapledon (1886-1950) is one of the most influential science fiction writers of the 20th century. His books, however, have proved almost impossible to adapt. War of the Worlds (1953) producer George Pal bought the rights to Stapledon’s 1935 novel Odd John in the 1960s but failed to bring the book to the big screen.

Last and First Men (1930) is an even trickier cinematic prospect. A book of fascinating speculation rather than a conventional narrative, it projects a history of some two billion years and 18 distinct species of human, starting with our own, as they migrate from Earth and spread across the outer planets.

Stapledon’s sprawling, ambitious novel is effectively reduced down to ideas about loss as the last doomed humans ponder their fate and solve great mysteries.

Laments that “Humankind did not choose decent suicide before the degeneration began” give way to “respect for the thing that destroys you.”

Angles not unlike Kubrick’s famous monolith shot recreate a ghostly world of alien artefacts. These extraordinary, evocative objects are, in fact, a series of remarkable communist-era World War II memorials in the Balkan Mountains, as commissioned by Tito. It’s one lost world standing in for another.

It ought to make for an impressive installation piece. Instead it’s an extraordinary, engrossing and strangely moving piece of cinema.

On BFI Player from tomorrow