The Rider: Cowboys and injuries

Review: Study of a damaged rodeo rider is a hugely impressive slice of prairie naturalism 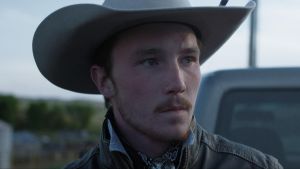 Towards the close of Chloé Zhao’s already celebrated South Dakotan character piece, Brady Blackburn (Brady Jandreau), an injured rodeo rider, disdainfully remembers his father asking him to “Cowboy up. Grit your teeth. Be a man.” The whole film could be seen as an engagement with those words. Do those expectations make a person? Do they wreck him? Can a person do one without doing all three?

The Rider would hardly be worth watching if it came to a definitive answer. What we get, instead, is a tolerant, empathetic study of a place that time seems to have passed by. There are glimpses here and there of a smartphone. But this story could have emerged almost unaltered 50 years ago. (Indeed, Montgomery Clift’s character in The Misfits goes through a less serious case of the same head trauma that inhibits the protagonist’s career here.)

The picture begins with Brady revealing the wound in his skull. He wraps his head in clingfilm and takes a painful shower. Over the opening act, Zhao, working from her own script, teases out his circumstances with quiet fluency. His widowed dad (Tim Jandreau), though no brute, spends too much money on poker machines and too little time connecting with his son. His younger sister, Lily (the delightful Lilly Jandreau), who has autism, is endlessly supportive of her adored rodeo-riding sibling.

Brady has been warned to spend some time away from the bulls and the broncos, but it seems the authorities don’t know quite how badly he’s hurt. Looking down at his curled right hand, he manipulates the fingers as if they were attached to somebody else’s dead body.

A glance at the surnames of the three lead actors should confirm that Zhao has cast her film with ordinary citizens from the right part of the world: a Native American family who know the land and have endured its cruelties. Assembling the story from local anecdote, she has – by accident or design – ended up with a film that has much to do with mental disability. Lilly acts as a sort of melodic chorus, repeating and amplifying her family’s concerns.

Brady fails to articulate a depression that surely must have as much to do with physical damage to the brain as it does with the growing awareness that he may never ride again. An old pal, partly paralysed and unable to speak following a rodeo accident, offers a practical warning of the risks Brady is thinking of taking.

Zhao understands that there is more to her protagonist’s dilemma than an addiction to bravado. The trappings and traditions of the western life offer these men a rare validation. They wear clothes like other men wear a uniform: cowboy hat, Wrangler jeans, plaid shirts. Though an apparently peaceful man, Brady really does carry a six-chambered revolver on his hip. Removing a vital part of this cultural structure really could bring the whole edifice down. Some part of the viewer yearns for Brady to climb upon a horse and leave it all behind, but that sot of thing only happens in the movies.

Zhao addresses her concerns with the gentlest of cinematic grammars. She has vast plains and vaster skies at her disposal – simultaneously suggesting majesty and overpowering nothingness – but she uses them only as occasional punctuation. The plot is stripped to a bare skeleton. Brady Jandreau, playing a genuinely decent man, speaks in a near-murmur that communicates as much to horses as it does to human beings. “If an animal around here gets hurt like I did, they’ll get put down,” he says.

Ultimately, the film is a little more hopeful. A hugely impressive slice of prairie naturalism.

A poetic response to the pandemic
9